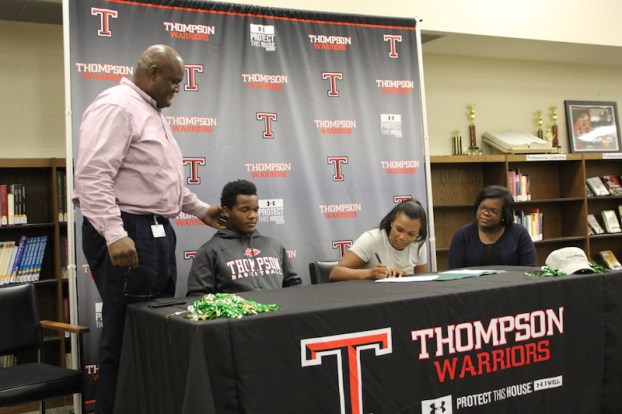 Thompson volleyball senior Madison Rayam signs her letter of intent to attend Jacksonville University with her mother sitting to her left and her brother to her right, while her father stands up proud of his daughter. (Contributed)

ALABASTER – Madison Rayam had a long successful run on the Thompson Warriors volleyball team, but now she is off to new adventures as her senior season has come to an end.

Part of her new adventure will include furthering her collegiate and academic career at Division 1 college Jacksonville University in Jacksonville, Florida.

“I want to thank all of my coaches that have helped me over the years because I’ve had so many of them,” Rayam said. “I want to also thank my parents for all they have put into this and my brothers for sitting through all of my volleyball tournaments to support me.”

She will now be leaving the Warriors to become a member of the Dolphins volleyball team later this year as she embarks on the next step of her career and life.  She was the leader of the Lady Warriors during the 2016 volleyball season finishing the season with 302 kills and has been an athletic force for Thompson over the last few seasons.

With her, Madison will take a wide array of experience gathered at Thompson High School both academically, personally and athletically that will help her succeed and continue to reach for the stars.

During her senior season, she wasn’t just a leader of the team on the court with 302 kills, but also showed strong leadership off the court as well.

Those leadership traits not only came from Madison’s father Thomas Rayam, but also the coaches and staff at Thompson that Thomas couldn’t thank enough for how much they have helped not only Madison chase after her dreams, but the entire family feel so welcome.

Madison will try to help improve a Jacksonville team that went 9-19, but with being such an athletic force and the valuable lessons she learned with the Warriors, that task should be nothing but conquerable for the standout volleyball player.

By ALEC ETHEREDGE | Sports Editor ALABASTER –  Since the spring of 2015, Angelica Justice has been seen pretty much... read more