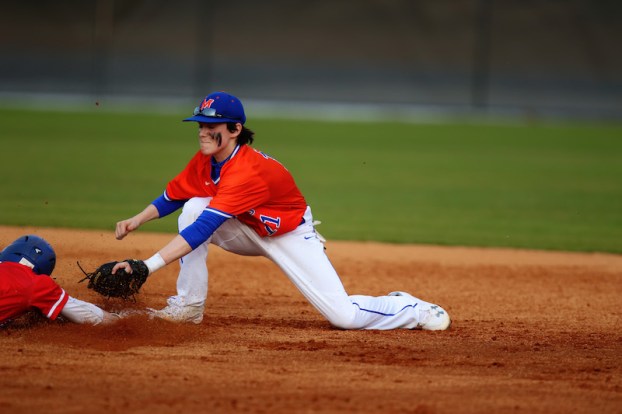 A total of six teams will start their run at a state title this Friday night in the first round of the AHSAA baseball playoffs. (For the Reporter/Cari Dean)

With 7A play still unfinished, Shelby County has already seen eight teams seal a spot in the 2017 playoffs in the AISA-6A classifications as they’ll kick off postseason play with a best of three series this Friday night.

Helena, Chelsea, Briarwood, Calera, Montevallo, Vincent and Kingwood will all take to the diamond later this week with their playoff lives on the line. While Oak Mountain won’t start their playoff run this week, they are the only 7A team to clinch a spot thus far. Spain Park and Thompson sit in good spots with strong chances of making the postseason, but both have big area series this week to determine their fate.

Russell County vs. Helena: The No. 1 ranked team in Class 6A, the Helena Huskies, will start their chase for a state championship on Friday as they host Russell County in a doubleheader. Game one will be at 4:30 p.m., by game two at 7 p.m. Should they split the first two games, an if necessary game will be played Saturday at noon.

The Huskies, who currently sit at 28-4, have won 12 consecutive games and 19 of their past 20. They have held 23 of their 32 opponents to two runs or less showing how strong their pitching staff is, which is the exact key to a deep postseason run. Their offense isn’t too shabby either having scored five-plus runs in 20 of those 32 games. My prediction, the Huskies will be adding a Blue Map to their trophy case at the end of this season.

Chelsea at Northview: Chelsea, considered the No. 8 team in 6A, will travel down to Dothan for its first-round series this Friday. Game one is scheduled for 5 p.m. and game two at 7:30 p.m. An if necessary game would be played on Saturday at noon.

The Hornets proved they have the pitching staff to hold up in a tournament type atmosphere as they put together four complete games during their 6-0 run at the Lake Martin Classic a few weeks back. The big question for this Chelsea team moving forward is can its offense give the pitching staff some run support? My prediction, if the Hornets can get by their first-round opponent, they can make a deep run possibly to the quarterfinals or semifinals. Either way this year has been a major improvement for Chelsea.

Headland vs. Briarwood: Thanks to a dominating performance in area play, the 5A No. 1 Briarwood Lions will host Headland in an opening round series starting Friday afternoon. Game one is scheduled to start at 4 p.m. with game two at 7 p.m. An if necessary would be played Saturday at 3 p.m.

Briarwood finished the regular season with an overall record of 24-3, including a perfect 6-0 against area opponents. The Lions absolutely dominated Class 5A Area 8, outscoring opponents 64-0, which shows just how dominating their pitching staff can be. This time of the year, that is the key to winning a best of three series to advance. My prediction, just like the Huskies in 6A, Briarwood should walk away with 5A state championship to close out its season.

St. Paul’s Episcopal vs. Calera: Calera also finished out area play with a perfect record going 4-0, which will allow them to host a first-round matchup as well. They’ll take on St. Paul’s Episcopal on Friday night with game one starting at 5 p.m. and game two at 7 p.m. The if necessary would be Saturday at 1 p.m.

Calera is another one of those teams that can easily make a push toward a state championship thanks to a strong core of arms. On the mound the Eagles, who finished the regular season 21-12, have Vanderbilt commit Jacob Smith, who is as close to a guaranteed win as you can get and has a no-hitter this season, Tyler O’Clair, who pitched some clutch games in area play, and Alabama commit Kevin Dowdell, who also has a no-hitter under his belt this season. My prediction, those arms are plenty good enough to get them to the semifinals.

Montevallo at T.R. Miller: The Bulldogs had a chance to win their area championship and host a first-round matchup but lost to Montgomery Academy in their area finale to lose that opportunity. Now they will travel to T.R. Miller this Friday with game one scheduled for 4:30 p.m. and game two for 7 p.m. The if necessary would take place Saturday at 1 p.m.

The Bulldogs’ 10-18 overall record didn’t look that great, but the level of talent they went up against was tough. They in turn were prepared for area play and fared well. My prediction, with their aggressive style of play on the base path and at the plate can steal any game, but will probably fall in the first round as T.R. Miller is 14-0 at home this season and 26-2 overall.

Winston County vs. Vincent: The Yellow Jackets also became area champions by sweeping Ranburne to end area play a perfect 6-0. They get to host Winston County on Friday at 4 p.m. and 6:30 p.m. in a doubleheader and an if necessary game would be played Saturday at 1 p.m.

Vincent has put together six consecutive wins to end the season as they have started clicking at the right time. My prediction, with very manageable first and second round series, the Yellow Jackets should make it to the quarterfinals before things start to get tricky, but they are in a portion of the bracket that could send them all the way to the semis.

Kingwood: The Kingwood Christian Lions will have a bye in the first round of the 2017 AISA state playoffs thanks to finishing first in their region. Their first postseason game will come in a best of three series in the quarterfinals on April 22 and 23.

By ALEC ETHEREDGE | Sports Editor Last week I went on a bit of a rant regarding the ASWA baseball... read more