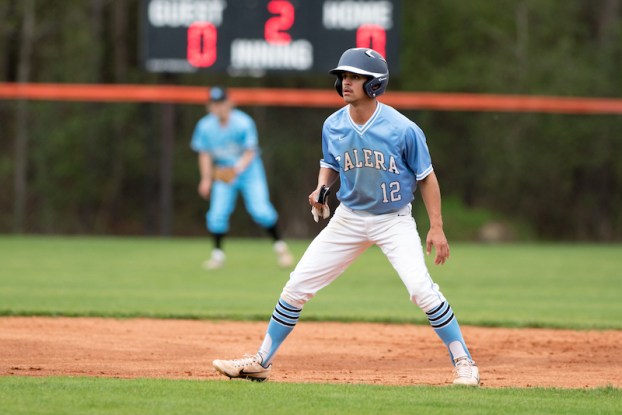 The Calera Eagles wrapped up area play 4-0 to win an area championship and seal a home series to start the 2017 postseason. (Reporter photo/Keith McCoy)

It’s been a season of accomplishments for Calera with no-hitters, complete games, shutouts and 20-plus wins. Now you can add 2017 area champions and a berth in the playoffs to that list as the Eagles picked up two area wins over Marbury on April 13 and 14 to finish area play a perfect 4-0.

Calera picked up wins of 3-0 and 10-0 to take home the championship, which allows them to host a first-round best of three playoff series with St. Paul’s Episcopal this Friday night. In their four area games, the Eagles outscored Jemison and Marbury by a combined 34-5, only giving up runs in a 16-5 win over the Panthers.

Game one of the series featured a strong pitching performance from Tyler O’Clair as he gave up just four hits and no runs, while getting 11 of the 21 outs he recorded by way of strikeout in a dominating complete game.

The offense was held scoreless through the first two innings, but O’Clair allowed his team the luxury of patience with the way he pitched on the mound. Finally, in the bottom of the third, Calera was able to make some noise.

Tyler Ferguson led the inning off with a nice at bat as he reached on a walk. After a strikeout, Austin McKinney and Quin Darius Crew strung together back-to-back singles, the latter of which brought in their first run of the game. O’Clair helped himself out by grounding into a fielder’s choice that brought home McKinney to give Calera a 2-0 lead.

Calera put together its second threat of the game. McKinney led off the inning with a walk and after another strikeout, O’Clair came back to the plate looking to help his cause even more. McKinney stole second during the first pitch up the bat to move into scoring position, and O’Clair took advantage by singling on a line drive to right field to bring in the Eagles’ third and final run of the game in a 3-0 win.

Crew led the way at the plate going 2-3 with an RBI, while O’Clair had his best game on both sides going 1-2 with two RBIs and a walk on the offensive side of things. Jacob Smith also had a multi-hit game going 2-3 with a double.

While the run column was more lively for Calera in game two, it was still the pitching that highlighted the Eagles’ run to a perfect area finish as Smith took to the mound and dominated from start to finish, pitching a one-hit complete-game shutout in the 10-0 win.

Smith threw 92 pitches in the shortened six-inning win, while striking out eight batters and walking just three. His dominance on the mound freed up the offense to go off for six hits and 10 runs.

It was a good thing Smith was on because it wasn’t a dominating consistent performance on offense for Calera as they only scored one run in the first five innings of the game. But just like game one, the pitching kept the Eagles alive allowing them the chance to explode for nine runs in the top of the sixth inning.

They picked up one hit in the first five innings, but in the sixth they were able to put together five singles, four walks, a hit by pitch, an error and a fielder’s choice to take the 10-0 lead.

McKinney led the way at the plate going 2-2 with two RBIs, a walk and a run scored. Crew also drove in two runs and scored one himself after going 1-4 at the plate. Christian Hall, John Ellison and Will Glasscock all picked up a hit apiece as well.

Calera now has an overall record of 21-12 as they look toward the postseason.

By ALEC ETHEREDGE | Sports Editor NORTH SHELBY – Being less than two miles down the road from each other... read more