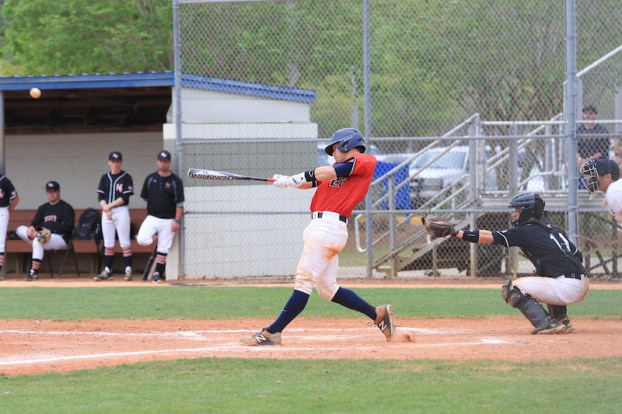 Oak Mountain picked up two wins over Spain Park this weekend to move to 4-0 in area play and clinch the 2017 area championship. (For the Reporter/Dawn Harrison)

NORTH SHELBY – Being less than two miles down the road from each other already pits a lot of tension between Oak Mountain and Spain Park, but being in the same area in every sport ramps up that tension even more, especially when it comes to the importance of regular season area play in baseball.

On Friday, April 14 and Saturday, April 15, the Eagles and Jags squared off on the diamond in two area games with major postseason implications on the line.

While there were only a combined seven runs scored between the two games to show how closely contested they were, six of those went the direction of Oak Mountain as they swept Spain Park with wins of 3-1 and 3-0 to remain perfect in Class 7A Area 6 play.

With Huffman sitting at 0-4 in area play and both Spain Park and Mountain Brook at 2-2 with two games against each other left, the Eagles have now clinched the area championship as they would hold a tie breaker over both the Jags and Spartans, meaning they have also clinched a spot in the 2017 playoffs.

The battle now swings to Spain park and Mountain Brook to see who can grab the area’s second playoff spot.

After falling behind 1-0 in the top of the first thanks to a couple of errors and a fielder’s choice, Oak Mountain settled in to score two runs in the bottom half of the inning and one more in the bottom of the third, while also holding the Jags scoreless over the final six innings of the game to win 3-1.

The two first-inning runs for the Eagles came after a leadoff single from Garrett DeAraujo, which was followed by an Ethan Holsombeck double. Two sac fly’s in the next two at bats brought home both of those baserunners to give them a 2-1 lead.

DeAraujo and Holsombeck continued that success into the bottom half of the third as they picked up back-to-back hits yet again, this time two singles. Mason Williamson followed two batters later with a line drive to center field to bring home Holsombeck.

The real star of the game, however, was Gene Hurst as he continued to look like one of the best pitchers in the state after going the distance to pitch a complete game shutout with nine strikeouts. It marked his eighth complete game of the season in nine starts. He holds an impressive earned run average of .491 per game.

The second game of the series was just as successful for the Eagles as they used three runs during the middle innings and strong pitching to win 3-0.

Oak Mountain scored one run apiece in the third, fourth and fifth innings thanks to an RBI single from John McDonald, a Spain Park fielding error and an RBI double from Caleb Floyd.

Joseph Hartsfield took to the mound in this one and followed Hurst’s suit by pitching a two-hit complete-game shutout. He allowed no runs and four walks, while striking out six batters as he kept the Jaguars confused the entire game.

The Eagles had six different guys pick up one hit in the game, while McDonald and Floyd were the only two with RBIs.

Oak Mountain moved to 26-8 this season with the two wins and will cap off area play this week with two games against Huffman, one Thursday at 4 p.m. and one Friday at 4 p.m.