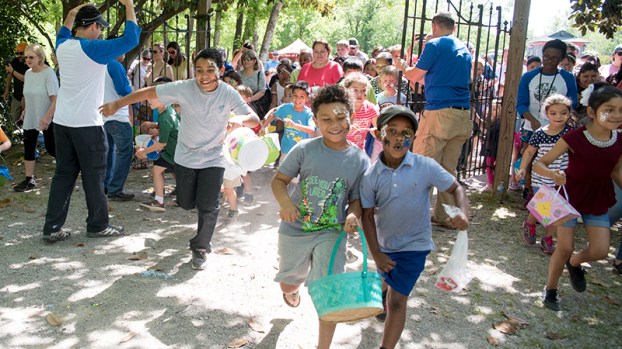 HELENA–Eggs, eggs and more eggs. This was the theme and more on Saturday, April 15 as the city of Helena hosted its annual Easter Egg Hunt prior to Easter officially being observed on Sunday, April 16.

This was the third straight year the city of Helena and Christian Life Church partnered to bring the fun event to families in Helena and several volunteers were on hand in the amphitheater to make sure the hunt was a success.

Christian Life Church Lead Pastor Jeremy Saylor and his family live in Helena and the partnership with the city began when Saylor was coaching in the Helena parks and recreation basketball league.

Saylor met Bill Miller with the Helena parks and rec department and asked if the city needed any assistance with the egg hunt, and since that time, the church has helped organize the egg hunt.

In addition to the egg hunts, there were multiple inflatables, face painting, carnival games, food, candy and more for everyone to enjoy.

Christian Life Church Pastor Danielle Stiles helped volunteer at the egg hunt on April 15, and said the best part was “being able to be in the community and love on the families.”

While the event was geared mainly toward children, the goal of the event was for Christian Life Church to serve the city as CLC student Pastor Noah Ray said.

“The main goal is just to partner with the city of Helena and for Christian Life Church just to serve the city,” Ray said. “That’s our heart and we want to be there just to help the city in any way we can and we want to put on a great event for the people of Helena.”

To view more photos of the event, visit Shelbycountyphotos.com/Events-and-Happenings/2017-04-15-Helena-Easter-Egg-Hunt/.