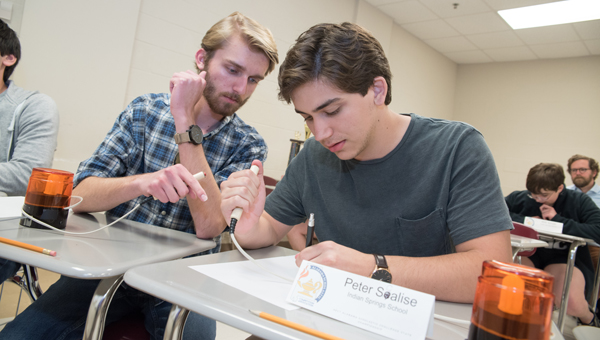 HOOVER – Spain Park High School and Indian Springs School were two of the teams that qualified for national scholastic competition tournaments based on their performance at the state tournament on April 7.

Indian Springs School, with coaches William Blackerby and Cal Woodruff, was the Class 3A champion.

Eight teams from a field of 24 qualified for national tournaments.

The event was held at Jefferson State Community College’s Shelby-Hoover Campus, as is usually the case, though last year’s competition was held at the old Berry High School because of a conflict, according to Sharon Daily, tournament coordinator for the Alabama Scholastic Competition Association.

About 100 schools across the state compete in the program.

Each team is made up of six students from grades 9-12.

The teams compete in a series of head-to-head matches.

Each match begins with a period of 10 open questions, with each student having the chance to buzz in first and present an answer.

During the second period, the students are given a worksheet with 20 questions and two minutes to answer correctly as many of the questions as possible.

After the three periods, the team with the most points, earned through providing correct answers, is the winner.

In a best-of-three matches contest, SPHS won a tiebreaker in the first match, lost on the last question in the second match and lost by five points in the third and decisive match.

Qualifying teams decide whether to compete in national competitions.

Indian Springs and Spain Park will compete in the High School National Championship Tournament on May 26-28 in Atlanta.

HOOVER – Hoover City Schools officials will request that implementation of the school system’s rezoning plan, which is under consideration... read more