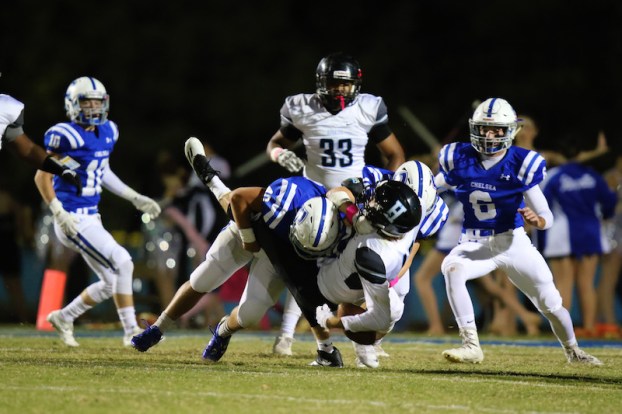 Shelby County Schools required all of its seven football-playing high school head coaches to enroll in Heads Up football to learn techniques on how to keep their players safe. (File)

At the forefront of the football world right now is player safety. With movies like Concussion, the $1 billion lawsuit settlement by the NFL and CTE being one of the biggest obstacles for the sport to hurdle, football is in a scary place at the moment.

No I don’t believe we are on the brink of football extinction, but less kids are playing the sport because their parents fear injury to their child, especially brain damage, at such an early age.

You’ll always have the people that say “it’s a contact sport, if you don’t like it then don’t play it,” but it’s a lot more of an issue than just being a contact sport.

Big hits are a part of football, and yes we all love getting the loud ooo’s and ahh’s from the crowd when a big hit happens on the field. The issue becomes with tackling with the head. Despite having a helmet on, the jostling of the brain so violently when you use it to directly level another player at game speed, not to mention the impact it has on your neck and spine, can cause long term health problems with bulging disc, brain trauma and spine issues.

While the excuse a lot of times tends to be “they expect these players to change something they have been doing their entire career by not lowering the body to make an impactful hit to disrupt a play,” that excuse is only valid for veterans in the NFL.

There is enough known at this age in time for coaches and players to take the initiative and bring up this next generation of kids learning to tackle using proper techniques so we can preserve the great game we all get so much joy from each and every fall.

Kudos to Shelby County Schools for taking that initiative by becoming one of the first school system’s in Alabama to require its seven football-playing schools to have a coach enroll in USA football’s Heads Up program.

“Our administration has an unwavering commitment to our student-athletes and coaches,” said David Hogue, director of athletics for Shelby County Schools. “Enrollment in USA Football’s Heads Up Football program is an important and exciting step forward for the school district, ultimately benefiting our student-athletes through improved coaching education.”

“I want to preserve this game and make sure kids continue to play because there is no sport like football,” Chelsea head football Chris Elmore said. “It really helps you learn a lot of life lessons that will help them down the line no matter what they do. If we don’t save football and it does somehow go away, then you are going to lose a chunk of guys that learn how to balance life through the game.”

Elmore took it a step further, getting ahead of the game as he invited SAFE Football’s Scott Peters down earlier in the year for a personal hands-on coaching clinic of his own so his coaching staff was well versed on keeping his players as safe as possible.

The initiative by Shelby County Schools and coach Elmore to teach young athletes the proper technique will change football for generations to come and give the sport a bright spot on the horizon that one day we will still be able to have the hard-hitting that we all love to see, but with a form that preserves the longevity of a player’s career and health.