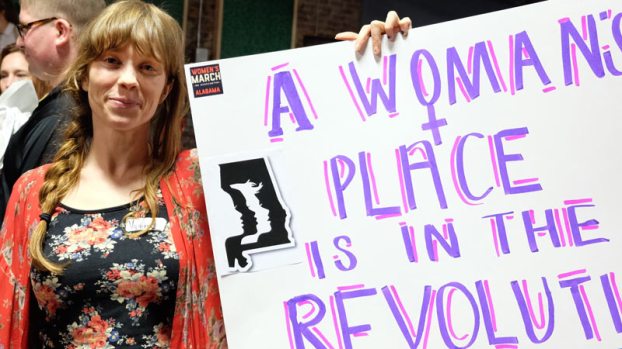 A participant in a human rights rally and march in Birmingham holds a poster that reads "A Woman's Place is in the Revolution."

The art and power of words

On Jan. 21, one day after the 45th President of the United States was sworn into office, over 5,000 gathered in Kelly Ingram Park, near the historic 16th Street Baptist Church.

In 1992, Kelly Ingram Park was completely renovated and rededicated as “A Place of Revolution and Reconciliation” to coincide with the opening of the Birmingham Civil Rights Institute, an interpretive museum and research center, which adjoins the park to the west.

A central fountain and commemorative statues of Dr. Martin Luther King Jr. and the Rev. Fred Shuttlesworth are there, as well as other heroes of the civil rights movement which flank the circular “Freedom Walk.”

The gathering of bodies that day included all ages and races, all united in their belief that “Women’s Right Are Human Rights.”

After a series of speeches, not able to be heard by everyone due to the mass of the turnout, all took up their signs and became a stream of bodies that flowed around several blocks—the last of which united with the first, forming a unified circle in the final moments.

The posted written words and graphics were powerful and sincere statements of each individual’s perspective on human rights.

“Tweet people with respect,” read one, carried aloft by a male.

As I roamed with my camera, I felt I was, indeed, a part of history-in-the-making.

Concurrently, in Washington, D.C., some 485,000 thousand were present. Worldwide, 600 Sister Marches were held, with an estimated 3 million participants.

A sign overhead a woman in a wheelchair read: “I am 97 years old and I say Women’s Right Are Human Rights.”

Others noted with a nod to our Southern heritage: “Y’all Means All” and “Yes, Even Alabama Stands for Equality.”

Participating that day were Evelyn Kathryn Wood, a University of Montevallo graduate, and her partner, Anthony Sutton.

Wood shared her thoughts: “One of the greatest freedoms of our country is the right to peacefully assemble. It is important to take every opportunity to stand together in a positive way to declare that we will not quietly have our rights stripped nor silently watch as the rights of our peers are stripped.

“Now more than ever, we must stand in solidarity to ensure that ‘Never Again’ really means never, for all of us. I particularly admired signs that stood up for immigrants, universal healthcare and the environment,” Wood noted, “And those that referenced our faulty prison system and were against modern day racism. All of these issues are especially pertinent right now, and we as a community must come together and organize to overcome all of these.”

Born and raised in Birmingham, Wood has also lived in Tennessee, North Carolina, California and Louisiana and spent a number of years traveling around the country working on various farms.

“Everything happened so fast that day,” she recalls. “I climbed up on the wall to take a picture of the crowds and then people started taking pictures of me. I asked Anthony to join me and it kind of spiraled.”

For Wood, the conversations that came after the march were the meaningful ones—discussions with people from various communities about what they were feeling and how it impacted them.

“I marched as a woman for women’s rights, but also I marched as a woman for black lives, for the environment, for immigrants, for blue collar families, for Standing Rock and other indigenous communities that are continuously pushed around for corporate interests, for the LGBTQIA community, for freedom of religion and freedom from religion, for the scientific community, for the disabled, for freedom of speech and the ability to live a peaceful life without persecution based on gender, race, orientation, nationality, religion.

“Working together will give us the opportunity to learn more about each other’s struggles, to challenge our preconceived notions and privilege, to act as allies in the fight for equal rights, to work better and stronger each time and grow our communities and as individuals because of it.”

The sign Evelyn Kathryn Wood created and carried is distinctively personal and thoughtful.

“It was a playful re-engineering of the French ‘Viva La Resistance’ popularized during the Nazi invasion of WWII,” she said.

“Essentially,” Wood concludes, “My baby is the fight for equality for children that already walk this earth.”

For “the love of yoga”

Registration open for first MoYo, Montevallo Yoga Festival, in May Story by Emily Sparacino Photographs by Dawn Harrison What do you... read more