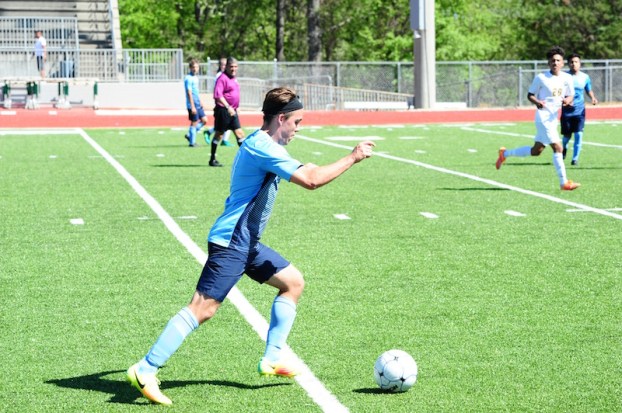 Spain Park fought back from a 2-0 deficit at Mountain Brook to win 5-2 and claim a spot in the 2017 postseason. (Reporter photo/Alec Etheredge)

MOUNTAIN BROOK – A playoff spot was on the line Monday night, April 17 as the Spain Park Jaguars traveled up I-459 to Mountain Brook where the No. 2 Spartans awaited their arrival.

It was clear the Spartans knew what was on the line early on as they stormed out to a quick 2-0 lead in the first 20 minutes of play, but Spain Park wasn’t ready to let their playoff hopes slip through their fingertips as they ended the game with five unanswered goals to claim a 5-2 win and a berth in the 2017 postseason.

After a defensive first 15 minutes of the game, Mountain Brook turned up the pressure, which eventually led to their first goal of the game 17 minutes in. Ethan Harradine picked up an assist as he shot the ball over to Selim Tunagur, who put it into the back of the net.

The Spartans decided to keep the pressure level high, which led to another goal three minutes later as Sam Nichols headed one home off of an inbounds throw to make it 2-0. All of a sudden, Mountain Brook was up 2-0 in a span of three minutes.

“Our mindset was that we had dug ourselves into a hole. We had been together for 20 games, running, conditioning and weightlifting, and we were at a point where we would find out if that was worth it,” head coach Matt Hall said of the 2-0 deficit.

Luckily for the Jags, there was plenty of time left and they certainly took advantage of that fortune.

Just a short three minutes after the Spartans took what seemed to be a large 2-0 lead, Spain Park responded with their first goal 23 minutes into the match to cut the lead to 2-1 as Liam Condone picked up the first goal in his hat-trick performance by powering home a shot from 20 yards out.

“When we went he got fired up,” Hall said of Condone’s performance. “He’s just such a physical player and emotional leader for us that can do stuff all over the field.”

The next 15 minutes were pretty quiet, but it was evident the Jaguars had turned up the defensive pressure as they allowed Mountain Brook very few chances. The offense took advantage as Gersain Leon found a loose ball right in front of the goal off a Brooks Rice corner that he fired into the net to put up their second goal of the half with 1:13 remaining. Spain Park had roared back to tie the game at 2-2 heading into the half.

“I was not surprised by the way we came back because these guys have the capability to do it having been in similar situations throughout the year,” Hall said. “I was really proud of the way they responded because it says a lot about our team and players.”

A big difference maker was a change in personnel as Hall decided his team needed to take control of midfield, which led him to moving Condone from the back line up to the center midfield position.

Spain Park’s defense was a real difference maker in the second half as Anders Jonas, Daniel Olvera, Jonovan Arguedas and Cole Starr all helped hold off the Spartans’ offense.

It gave the Jaguars some time and freedom to start clicking offensively, which started happening at the 21:39 mark as Condone picked up his second goal of the game on a corner kick from Adrian Castro.

With the Spain Park defense still holding tight, Condone completed the hat trick with 9:42 left to play on a rebound off a shot from Rice. Less than a minute later, the Jags iced the game when Cameron Sumpter found Rice on a fast break that led to their fifth unanswered goal as they went on to win 5-2 and clinch a berth in the playoffs.

This marks the third consecutive year that the Jaguars will be making a postseason appearance and with their strength of schedule, they have the experience against top opponents to be a threat to anyone in their way.

“Right now the goal is to get healthy and ready for the playoffs,” Hall said. “We feel like we have been tested throughout the year, so we will definitely be prepared for the postseason.”

By ALEC ETHEREDGE | Sports Editor CHELSEA – When Zalon Reynolds took off his Chelsea jersey for the last time... read more