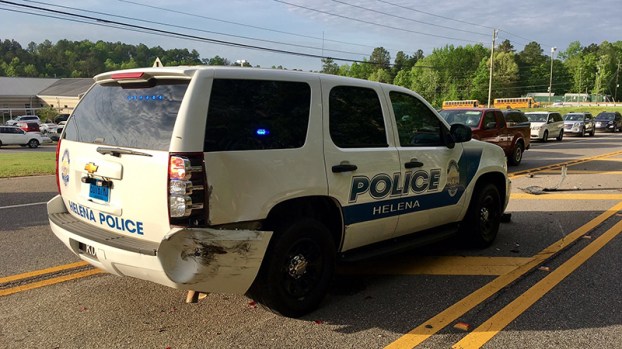 A Helena Police vehicle was damaged the morning of April 18, after a motorist allegedly driving under the influence struck the back of the car during morning school traffic. (Contributed)

HELENA–School traffic at Helena Intermediate School didn’t go as planned the morning of Tuesday, April 18, after a motorist allegedly under the influence crossed the centerline on Shelby County 52 in front of HIS and clipped the back of a Helena Police Department patrol car.

The incident happened at approximately 7:15 a.m., as Helena Police officer Philip Richards was directing school traffic when his vehicle parked in the middle lane was struck. Thankfully, no injuries occurred because of the crash.

The suspect, Nathan Bowden, was questioned at the scene and transported to the Helena City Jail after officers suspected he had been driving under the influence. Bowden was the only one in the vehicle and was not carrying any passengers.

“I’m just glad he (Richards) wasn’t hurt and any time you’re directing traffic on a busy roadway you’re taking life into your own hands,” Helena Police Chief Pete Folmar said. “Also, the only way we can handle it is to get out there and take that risk but ultimately it’s on the motorist to help us out and do their part. For the most part we never have any issues but there’s still a risk involved and people need to be cautious and not drive under the influence.”

The Helena Police Department was thankful the damage was limited to just the vehicles and no injuries occurred, but also stressed the importance of not driving distracted or impaired on their Facebook page.

“Every morning and afternoon HPD officers place themselves at risk by directing traffic to ensure it’s safe and efficient flow in and out of all of our schools. To most it has become a commonplace sight that we take for granted,” the post read. “Today we were reminded of exactly how dangerous this job can be. The area around HIS in the mornings is incredibly congested with hundreds of cars passing that location in under an hour. We wanted to share this to remind everyone to please pay attention to officers in school traffic and drive with caution through all our school zones. We also use this incident to remind people to not drive while under the influence of any substance or alcohol.”