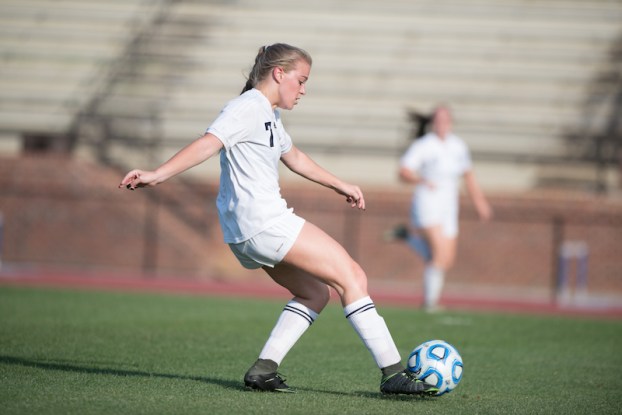 Briarwood tied for the highest ranked team in the county as they came in at No. 2 in Class 5A of the girls rankings. (Reporter photo/Keith McCoy)

The trend of having at least one county team ranked in all four of the girls soccer classifications continued as the latest rankings were released by eurosportscoreboard.com on Sunday, April 16, featuring seven different teams from across Shelby County.

Having seven girls teams ranked brought the grand total between both the boys and girls to 14 teams as the boys also put seven in their respective top 10.

In the 7A classification, we saw all three of the county’s 7A teams find a spot inside the top yet again, but none were higher than the Oak Mountain Eagles. Oak Mountain hasn’t lost a game since March 14, and has won eight of its last nine games with the only non-win being a 2-2 tie with Pace Academy. The Eagles sit at 15-2-2 overall and 5-0 in area play. With one area game left against Huffman, who they beat 20-0 earlier this season, finishing area play undefeated seems to be a formality.

Sitting just behind them at No. 4, are the Spain Park Jaguars. The Jags are 3-4 over their last seven games, but three of those four losses came to Oak Mountain and Vestavia, who sit above them in the standings. Spain Park is 11-5-1 overall and 2-2 in area play with two area games against Mountain Brook and Huffman left on the schedule. A win over the Spartans on April 25 would clinch a spot in the playoffs.

With a 12-9-2 overall record, the Thompson Warriors have yet to fall out of the top 10 this season showing how tough their schedule has been. The Warriors came in at No. 10 in the poll despite losing three of their last four games. Sitting at 2-3 in area play, Thompson needs a big win over 3-2 Hoover to try and sneak into a playoff spot.

The Chelsea Hornets, who grabbed the No. 4 spot in the 6A standings, are as hot as hot gets at the moment having won six games in a row by outscoring opponents 42-2 in that time span. They have locked up a perfect 4-0 record in area play to win the area championship and grab a home game in the first round of the playoffs. They have one more game left with Hoover on April 25 to end their season.

The Briarwood Lions are 4-1-1 in their last six games and another team like Chelsea that is hot at the right time. Coaches are taking notice of their strong play as they came in as the No. 2 team in Class 5A. Led by Sarah Adcock and company, this Briarwood squad is a strong contender for the state championship having fared well against the best teams across all classifications.

A week after jumping from No. 2 to No. 1, the Westminster Knights have fallen back to No. 2 in the latest 1A-3A top 10. Westminster has gone 2-1 since that point with a 3-1 loss to Holy Spirit and two dominating wins over American Christian Academy and Altamont High School. They are 3-1 in area play with one area matchup against American Christian still remaining.

Indian Springs sits just one spot behind them at No. 3 having won four games in a row. Over their last 10 games, they have gone 8-1-1 to cement themselves as a strong title contender.