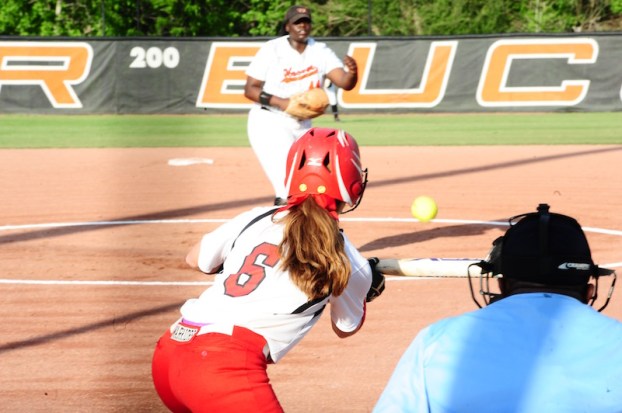 Lauren Haskins prepares to lay down a bunt early in the game. She would end up reaching base and eventually scoring later that inning. (Reporter photo/Alec Etheredge)

HOOVER – Sitting in one of the toughest areas in Alabama high school softball, an area win for the Thompson Warriors means they can compete with anybody and are a team worthy of vying for a state championship.

On Tuesday, April 18, the Warriors faced off against another one of those difficult area rivals as they took to the road and headed to Hoover High School to take on the Buccaneers. Just as you’d expect in a matchup between these two high-caliber teams, the game was nothing short of entertaining.

In a game that featured a combined 26 hits, Thompson led throughout but could never separate themselves and take command.

The Warriors started the scoring in the top of the first when Kennedy Foote singled on a ground ball to right field that brought home Kindall DeRamus who led the game off with a walk.

In the top of the third they added to that lead after Lauren Haskins and Foote put together back-to-back singles, the second of which allowed Haskins to cross the plate for a 2-0 Thompson lead. Madison Bubel followed with a third consecutive single, but a fielder’s choice and a fly out ended their third-inning scoring threat.

Hoover cut into that lead in the bottom of the third when they strung together a single, walk and hit batter before Madeline Harris drove an RBI single to center field to make the Thompson lead 2-1.

The Bucs came back in the bottom of the fourth and tacked on one more run in similar fashion as they put together back-to-back singles, a walk and a hit batter to bring in the game-tying run.

Thompson responded quickly in the top of the fifth thanks to a double from Foote in the second at bat of the inning. Two batters later, Kelsey Edwards singled on a hard ground ball to center field that drove in Foote to help the Warriors reclaim the lead.

They held that 3-2 lead all the way into the bottom of the seventh, but Hoover wasn’t ready to end the game just yet. The Bucs grabbed three singles in the inning, the last of which was an RBI-single from Caroline Nichols to tie the game at 3-3. The bright side for Thompson was that they got the final two outs of the inning with runners in scoring position to prevent the loss.

Clearly the Warriors saw that positive and took it into the top of the eighth with a lot of determination to come out on top. Edwards singled to lead off the inning and after a ground out during the next at bat, Thompson strung together another single, a hit batter, a walk, a third single, two doubles and a walk to drive in seven runs and take a commanding 10-3 lead after almost seeing the game slip through their fingers a half inning earlier.

Hoover was only able to hit for one single in the bottom of the eighth as the Warriors held on to win 10-3, which moved them to 3-2 in area play.

Bailey Whitfield got the start in the circle and went 6 1/3 innings allowing 10 hits and three earned runs.