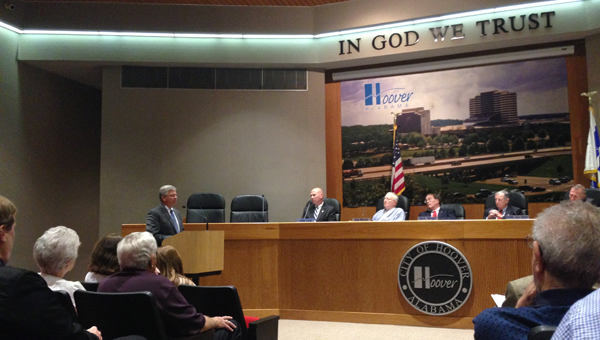 Hoover City Council and Planning and Zoning Commission meetings are being streamed live and archived on the city’s YouTube page. (FILE)

HOOVER – Hoover’s recent implementation of technology to offer live video streams and video archives of public meetings is a step toward government transparency and a legacy for a committed resident.

Before his passing in March, Hoover resident Dan Fulton was a familiar sight at public meetings in Hoover, holding aloft a recorder that he used to post audio of the meetings to social media so that residents could stay informed about their municipal government.

“A lot of people found his work useful,” Shaw said. “I have a lot of respect for him and how he got that started as a civic service.

“He’s a big part of why people were interested in this. We’re going to miss him, but we’re going to try to carry on that legacy.”

When Fulton became unable to attend meetings, others, including Arnold Singer, carried on the tradition by recording audio.

Then, Councilman Casey Middlebrooks streamed video of a council meeting on Facebook, and the popularity of the stream convinced officials to “fast track” implementation of streaming technology, Shaw said.

Fulton was able to watch streams from meetings before he died.

The current set-up for video recording city council and planning and zoning commission meetings is a basic one, with an iPad placed in the back of the council chambers.

“The most important thing was to get it working,” Shaw said.

A planned $500,000 renovation of the third floor of Hoover City Hall, including the council chambers, will include a multimedia upgrade, Shaw said.

“We’ll put a lot of thought into how the new chambers will facilitate streaming,” he said.

A budget for the renovation project was approved for the current fiscal year, but there is no timeline for when the work will be completed.

Live streams of the meetings, and archives of previous meetings, can be found at “City of Hoover, Alabama – Official Site” on YouTube.

Shaw said archives will be maintained on the YouTube page for ease of access, continuity and portability.

Streaming meetings and providing the archives benefits residents by increasing transparency, providing education about how the municipal government operates and establishing a historical record, Shaw said.

“A lot of people have never been to a meeting before, so they have no idea how it works,” said Shaw, one of four councilmen serving their first terms who have committed to transparency. “We want to make sure we’re at the forefront of open government and how that works with the internet.”

University of Montevallo partnering with Birmingham to co-host NCAA DII National Championships in 2020, 2021

From Staff Reports INDIANAPOLIS, Ind. – The University of Montevallo will partner with the City of Birmingham to co-host the... read more