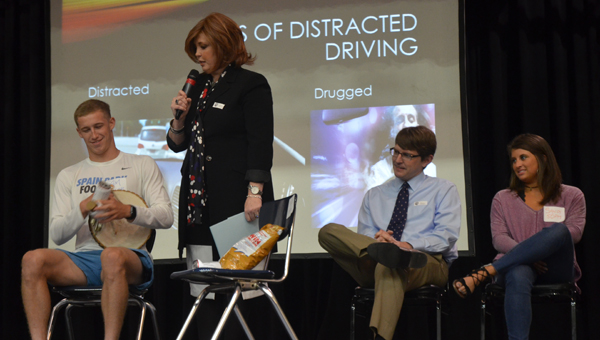 Spain Park High School students participate in a role-playing scenario at an assembly on Tuesday, April 18, to demonstrate the consequences of drunk driving. (REPORTER PHOTO/STEPHEN DAWKINS)

HOOVER – Spain Park High School students on Tuesday, April 18, acted out the potential consequences of driving drunk instead of simply hearing about them.

“We want to make sure that we have a safe prom,” Principal Larry Giangrosso said. “One day you’ll understand this as you have your own children that we want to keep everybody safe.”

Hoover Mayor Frank Brocato also spoke at the assembly. As a former firefighter, Brocato said he understands the importance of safe driving.

In the skit, five students were selected for roles including a boy and girl at a prom party, a judge and the parents of another student killed by the boy while driving drunk.

Alvis stressed that murder charges and other “significant penalties” can be levied against students who drink and drive—and even friends that are involved with an incident, such as the girl in the scenario who asked the boy to drive her car.

Alvis said defendants who come before her sometimes did not intend to commit the crimes but that does not absolve them from guilt. She added that youths who drink and drive consider themselves to be “normal.”

“In a minute, that can all change,” Alvis said.

Guy and Terri Allbrook also addressed the students about their daughter, Nicole, a 2007 Oak Mountain High School graduate who was killed in a wreck involving a drunk driver at the age of 24.

“Nicole was you: full of energy, bubbly personality, she walked into a room and everybody wanted to know who she was,” Guy Allbrook said. “She had the whole world in front of her.”

Allbrook said his daughter lost the keys to her vehicle while spending time with friends, one of whom offered to drive her home though he had been drinking.

The vehicle left the roadway and struck a tree, killing Nicole Allbrook immediately.

The driver served jail time after being convicted of vehicular murder.

“Nicole never comes home, and he walks out of that car straight into prison,” Guy Allbrook said. “This is a story that always happens to somebody else until it happens to you.”

Allbrook urged the students to make alternate plans instead of driving if they are under the influence—even if it means calling their parents for a ride.

“If you don’t make it home, with broken hearts, they’ll never get over it,” he said.