Alabama’s geographic location in the South is not up for debate. It is in the “Heart of Dixie” – any state license plate will tell you that. However, if one asks where the geographic “heart” or center of Alabama is located, that might be a bit tougher to explain. For years, it has been the stuff of local lore – but there is information that threatens this belief central to Shelby County. You might not know the locations – yes, plural use of the word – at the heart of the debate, but you should. 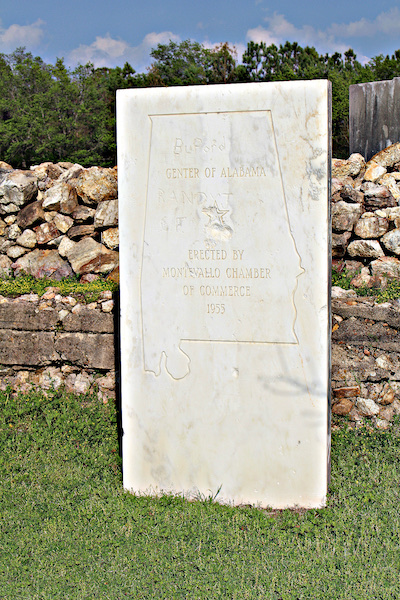 A marble monument depicts the center of Alabama with a star. (Contributed)

Type “geographic center of Alabama” into any Internet search engine and you will be surprised at the number of answers you receive! For most south Shelby County children growing up in the 1950s, 1960s and 1970s, a site down Reynolds Cemetery Road off Highway 25 between Montevallo and Calera was what classroom teachers talked about. It was often a fun Saturday or Sunday bike ride or family drive to see a large white Alabama marble marker with a big star marking “the” spot. The monument continues to stand there, right in front of a lovely rock wall in the small rural resting place for many early Montevallo residents. On a pretty day, it still makes a fun destination for a bike ride or drive.

However, is it possible that even pre-marble monument there was some disagreement about the correct location of the center star? It would certainly seem so – because there is a duplicate star about 2 miles away on the steps of Main dormitory at the University of Montevallo. An accompanying metal marker declares that to be the center of the “Heart of Dixie.” Over the years, hundreds of students and their families and friends have stood on that star to take photos commemorating time spent at the only public liberal arts college in Alabama. Tourists have logged miles to the brick streets as well to see the geographic star – the location at UM was easier to access for novices than the old cemetery.

However, it seems that some celebrate a geographic center located, not in Shelby County, but on a family farm in Chilton County! What?! Is that even possible?! It is a well-known point of county pride and almost too difficult to consider that what we have known all along was fiction even back in the day. But, it seems that in 1953 Shelby County lost the designation when Congress passed the Submerged Lands Act. This extended the boundary lines into the Gulf of Mexico for all five states bordering it. For Alabama, that meant a three-mile extension. Therefore, the center of the state also traveled south three miles. Perhaps that explains the large, impressive, white marble slab dated 1955 near Montevallo!

Recently, County Manager Alex Dudchock related that growth continues at a rapid pace with the population now topping 210,000. Whether or not the state’s precise geographic center is here, it is easy to see the truth. For thousands, locations throughout Shelby County are near to the hearts and central to the lives of those who choose to live here. And, touching the stars is as easy as a short drive down I-65 and Highway 25.

Getting to know you

By RENE’ DAY / Community Columnist Let me state the obvious – Spring is here. Most students in the county... read more