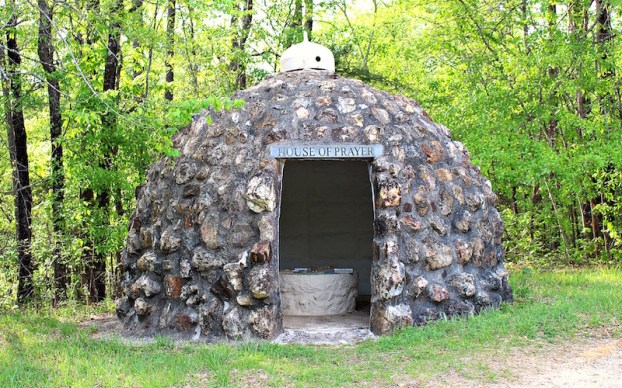 Calera's "House of Prayer" offers a place for meditation and reflection. (Contributed)

A house built for prayer

Indeed, we are living in strange times. After the events of the last week or two, perhaps there has never been a greater need for times of reflection, meditation and prayer. This week’s featured “can’t miss” Shelby County site provides an excellent opportunity to do just that.

On the left of County Road 63 in Calera stands an interesting rock igloo with a “House of Prayer” granite sign placed at the top of the entrance. There is no door, so it is always open to anyone stopping by. Inside, you will find an old millstone built into a table or altar on which bibles and handwritten prayers, prayer requests and simple devotional thoughts rest. It is quintessentially southern – a bit quirky, but a very individual work of art representing the faith of the people who built it.

In 1978-1979, Robert Kendrick was a retired Alabama State Trooper interested in experimenting with unique building techniques and shapes. A series of church break-ins around the state at the time distressed him greatly. Thus, he began making plans to build a place of worship immune to theft – using materials that were readily available around his Calera home. A friend, Clyde Carden, owned property along Highway 63 and, believing in the project, donated land on which Robert built his chapel. The rock igloo you see there is the result of that collaboration. Mr. Kendrick’s children helped by gathering the rocks used in conjunction with massive amounts of concrete to hold them in place.

Kendrick reasoned that without a door, there would be no temptation to “break in.”  He built the opening low enough so that most adults have to bend slightly to get in. This was his way of making sure that all enter reverently. Nothing adorns the whitewashed interior walls. Attention is directed to the center millstone table/altar. Worn bibles show evidence of use. Rainbow colored pages indicate favorite verses and passages highlighted by past visitors. Empty pads of paper, pens and pencils are available should someone want to add to the prayer and prayer request collection already there. Those wishing to light a candle in memory or honor of someone dear may do so using the small candles in the center of the millstone. It is a simple, sweet place conceived and constructed by people who wanted to glorify God and provide a place of solace to those who travel by.

To get there, turn onto County Road 63 from Highway 25 near the Calera Public Library. It is on the left just before you reach the intersection with County Road 16. There is parking at the site. In fact, why don’t you use the itinerary outlined here over the past three weeks and make a day of it? Start with the American Village in the morning, then visit the geographic markers in the Montevallo area, and finish up with some quiet time at Calera’s House of Prayer. There is no better way to get acquainted with south Shelby County.

By RENE’ DAY / Community Columnist Alabama’s geographic location in the South is not up for debate. It is in... read more