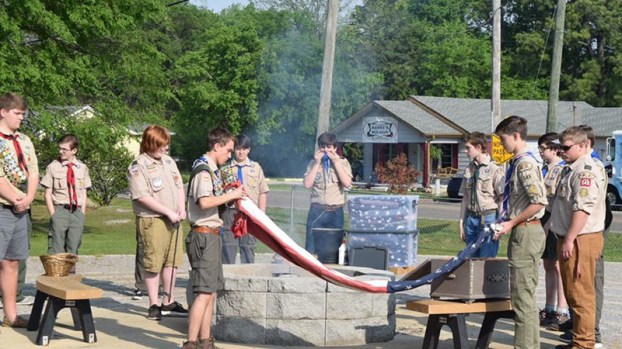 Thompson High School freshman Rand Willis is working to complete his Eagle Scout project, which consists of building boxes for those interested in properly disposing of a damaged, dirty, or unwanted American flag. A flag retirement ceremony was held on April 15, at Alabaster First United Methodist Church. (Contributed)

ALABASTER – Throughout his time as a Boy Scout, Thompson High School freshman Rand Willis has learned to appreciate and respect the American flag.

“One of the first things we are taught in Cub Scouts is how to respect the American flag,” Willis said. “When I started trying to figure out what I wanted to do for my Eagle Scout project, I wanted to come up with something where I honored the flag.”

Willis said a lot of times when Alabaster Boy Scout Troop 548 gathered for a meeting, bags containing American flags in need of retirement were found at the troop’s meeting place, prompting him to think of a way to ensure the flags were properly, and respectfully, disposed of.

“I created boxes for flag collections throughout the Alabaster area,” Willis said.

The boxes provide a way for those interested in properly disposing of a damaged, dirty, or unwanted American flags, according to Willis.

The boxes are located at Alabaster City Hall, Alabaster Fire Station No. 1, the Alabaster Police Department, The American Village, the American Legion and the Heart of Dixie Harley-Davidson.

The ceremony was a final step in Willis becoming an Eagle Scout.

“The actual flag retirement ceremony consists of scouts going around and taking the flags and placing them in a fire,” Willis said. “It is a very patriotic experience, and something I am thankful I have been able to be a part of.”

When Willis began his project, he had an original goal of retiring 50 flags, but has collected a total of 589 flags.

“It has been overwhelming, but I am so appreciative for the support I have received,” Willis said. “Both Home Depot and Cigna have also assisted me in the collection of flags at multiple locations across the country, which has been really neat.”

Willis said a flag needs to be retired when the flag is no longer able to be flown due to being stained, faded, or tattered.

Willis still has a few steps left until he completes his Eagle Scout project, including a ceremonial dumping of the ashes at American Village in honor of those who have served to protected America’s freedom, and a board review.

“I have learned a lot throughout this process, and I am thankful that I have gotten to participate in retiring flags,” Willis said. “It is a big honor.”

Willis is the son of John Mark and Amber Willis.

By EMILY REED / Special to the Reporter ALABASTER – More than 500 Alabaster students in the choral departments from... read more