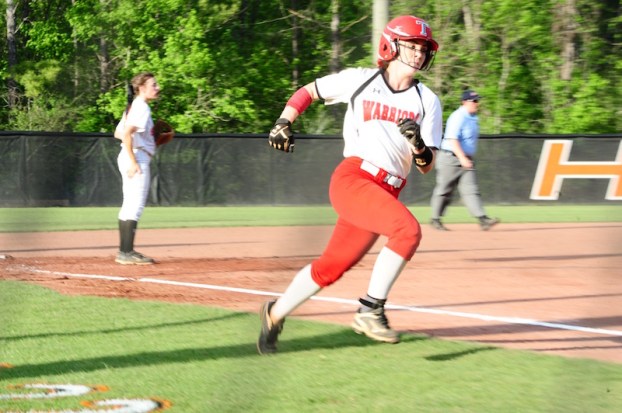 The Thompson Warriors have improved their ranking over the last couple of weeks and are playing their best softball at the right time. (Reporter photo/Alec Etheredge)

The final ASWA softball rankings are upon us, which means area tournaments and postseason play are both right around the corner. With the most important part of the season just a mere few days away, it’s the time of the season where championship teams need to be playing their best ball and several Shelby County teams are doing just that.

There have been several highlights during the 2017 season including Spain park and Chelsea both being considered the No. 1 team in their respective classifications for much of the season. Strangely enough, of the five county teams ranked, they are possibly playing the worst right now, but both still sit in the top six showing how strong softball is in the county right now.

Spain Park remained at No. 2 for the third consecutive week after losing the No. 1 spot three weeks ago. The Jags started the season an astounding 22-0, but have lost two straight and gone 12-5 over their last 17 games. Those back-to-back losses have come at the hands of area rival Oak Mountain, 2-0, and Tuscaloosa County, 12-2. They still sit as a strong favorite to win the state championship.

Playing its best softball of the season, however, is the Thompson Warriors, who have won nine of their last 10 games. They are currently in a tie for first in their area with Vestavia, who sits just one spot ahead of them at No. 6. Over the last week they have beaten ranked teams in Helena, Tuscaloosa County and Chelsea.

Moving down to the 6A standings, the Helena Huskies (20-12) came in as the highest ranked team in the county for the second consecutive week despite falling one spot. They dropped from No. 3 down to No. 4, but have won seven of their last 10. The Huskies also picked up their second win over the Hornets on April 19, in a close 2-1 contest. The win gave them the regular season area championship, which means they will host the 2017 area tournament with a trip to the playoffs on the line.

The Hornets came in two spots behind the Huskies at No. 6 after losing four straight games and seven of their last 11. Despite their struggles during the second half of the season, Chelsea is the reigning 6A champion and will pose a threat to anybody in their path that tries to prevent them from retaining that honor.

The last of the ranked teams are the 20-5 Shelby County Wildcats who moved up to No. 8 in the final rankings of the season. Shelby County has won 11 of their last 12 games and is hitting on all cylinders down the stretch of the season as they look to carry their late-season success over into the playoffs.