After receiving the menu for the FCCLA State Culinary Competition, the Shelby County College and Career Center Culinary students practiced at least three times a week for about a month to prepare for their biggest competition of the year. 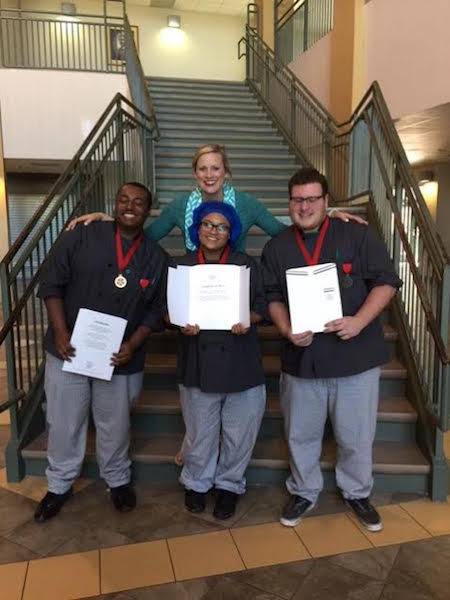 The College and Career Center Culinary students won first place in the FCCLA Alabama State Competition by preparing an upscale dinner menu for a panel of judges. (Contributed)

The competition, held April 1 at GW Carver High School in Montgomery, had 10 teams from high schools across the state prepare the menu for a panel of judges.

The students had 30 minutes to prep the ingredients and then one hour to prepare and plate the meal. Every team at the competition had the same menu offering Steak Diane, Potato and Parsnip Puree and Apple Endive Salad.

The meal was judged on overall appearance, execution of technique, food plating, following the recipe and teamwork.

Notable judges included the CEO of Red Diamond and the head chef at Alabama Power.

Practice paid off for the CCC student team because they won first place in the state.

The judges complimented them on their excellent teamwork and superb execution of the menu items.

The judges kept saying that they couldn’t stop eating the potatoes and steak, as they were cooked perfectly.

Students won a gold medal and were each awarded a $2,000 scholarship to the Culinary Institute of America in Hyde Park, New York.

“We were stunned when they called our name and were kind of in shock,” Nick Sandy, a Calera High School student, said. “We practiced so hard and felt that we worked great as a team. It was a great experience and we are so excited to travel to Nashville in July.”

“When they called our name, I was screaming,” CCC Culinary Instructor Leah Marlett said. “The students acted like they didn’t do a good job in the competition, so I was a little worried. I am so proud of them and excited for the opportunities that winning this competition will give them.”

They will compete in the National FCCLA competition in July in Nashville, Tennessee.