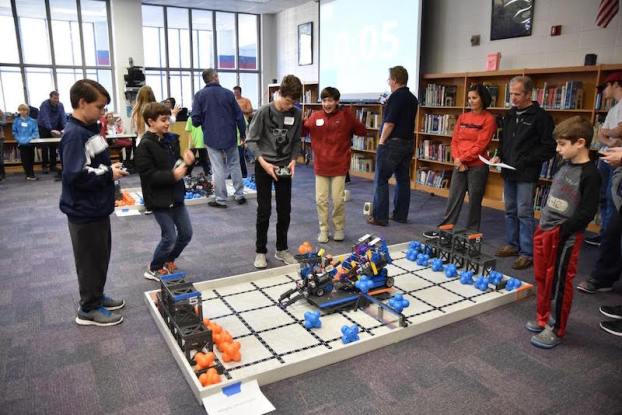 The OMMS Robotics Team earns bonus points in the qualification round at the OMMS Robotics Competition by balancing both robots on the bridge with 5 seconds to spare. (Contributed)

In order to compete, students must design and build a robot.

This process requires that they document their engineering design process in an engineering notebook.

Once the robot is complete, the young engineers program the joystick so that it syncs up to the robot.

They must also program the robot so that it moves autonomously (without the use of the joystick).

Finally, students must complete a research project on the STEM topic of Robotics Technology in the Community.

During the competition, teams go before a panel of judges to present their STEM project and to discuss the engineering design process the team went through.

When the program began in 2014, there were about six-10 students (two teams) that competed in VEX robotics competitions.

Last year, the program doubled to around 20 students (six teams).

This year, they had 64 students (16 teams) on the robotics team.

Robotics is becoming increasingly attractive to the students at Oak Mountain.

This year alone, the teams competed in nine competitions around the state.

Along the way, they have traveled to Opelika, Oxford, Mt. Brook, McCalla and Jacksonville State University.

A breakdown of these awards is as follows:

This year, the state of Alabama had 137 teams registered for events.

In March, the top 30 teams in the state were invited to compete in the State Robotics Competition.

Out of the 30 teams selected, 10 teams were from OMMS.

They had a third of the field competing. At the State Competition, OMMS won Teamwork Challenge (two OMMS teams) and Design Award.

The ultimate goal of any robotics team is to qualify and compete at the VEX Worlds Robotics Competition. This year, OMMS had five teams qualify to compete in this world-wide event.

Only 306 teams of the 4,252 teams around the world are chosen for this prestigious event.

OMMS had more teams to qualify than any other school in the state of Alabama. In fact, only six other schools around the world qualified as many teams as they did.

This will be an event that will have a lasting impact on our students for years to come. This is truly the Olympics of Robotics.