There’s nothing like visitors to show you your own town

So you lived in the Montevallo area almost 40 years and think you know the town? Maybe, but maybe you don’t know it as well as you think.

That’s how it was for me during a recent visit from my cousin and her husband. Lynn and Walter Norris live in Kinsale, Va., a quaint Colonial village in the part of Virginia known as the “Northern Neck.” They had never before visited Montevallo. 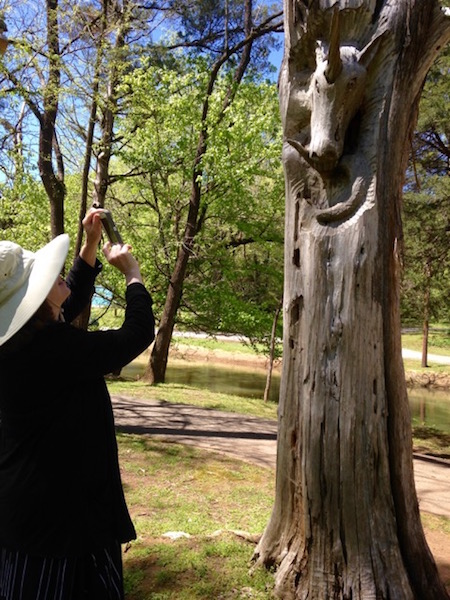 One of our favorite Montevallo spots turned out to rate high on their list, too. They fell in love with Eclipse Coffee and Books. Lynn, who is gluten-free, immediately latched onto Eclipse’s quinoa salad, also one of my favorites, although nobody could accuse me of being gluten-free.

Lynn’s adoptive family had connections to Piper and Coleanor in Bibb County. Fortunately, we knew just the expert guide to show them around. Dr. Jim Day, a UM history professor, guided us to where the mining camp of Piper once lay, adding West Blocton as a bonus. Lynn and Walter benefitted from his extensive research about the history of that part of Bibb County.

“This is fascinating,” Lynn said of the Blocton coke ovens. Lynn bought two copies of Dr. Day’s book, “Diamonds in the Rough: A History of Alabama’s Cahaba Coal Field,” to take home with her. Day’s tour “was very special,” Lynn said. “He was so gracious to make time in his schedule for us.”

The tour started on an auspicious note: A chance meeting with UM President John W. Stewart III who happened to be strolling up North Boundary Street and stopped to greet the visitors.

During the Bibb County tour, my husband and I had to peel off early for our grandson’s baseball game. The Norrises found themselves back in Montevallo around 5 p.m.; naturally they gravitated to Eclipse—where they happened to meet Blue Phrog Art Gallery owner Phil Hurst and Tim Tingle, the creator of Tinglewood.

Lynn was so taken with Tingle that she bought his book although she had not yet seen the marvelous wood carvings in Orr Park. That happened the next morning when, under bright sunny skies, we visited Tinglewood and Blue Phrog.

We spent an afternoon at a reading by author Robert R. McCammon on the UM campus.

A voracious reader, Lynn prowled my bookshelves while she was here and discovered the works of Montevallo authors Bill and Loretta Cobb and memoirist Norman McMillan.

One night we drank margaritas while waiting for takeout at El Agave; another night we dined at Main Street Tavern. (Nothing can touch the Tavern’s tomato and avocado salad).

As Lynn and Walter pulled out of the driveway toward Kinsale, the car seemed to be riding a tad lower in the rear from all the books Lynn had bought. I blew kisses and thanked them for helping me to know Montevallo a little better.

By NANCY WILSTACH / Community Columnist The Boys and Girls Club of Central Alabama is revving up for a summer... read more