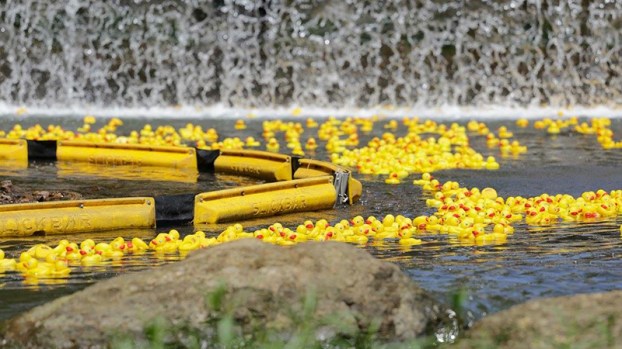 Tickets are on sale now for the Buck Creek Festival duck race that will take place at 3 p.m. on Saturday, May 13. (Contributed)

HELENA–Kids and parents alike line the banks of Buck Creek in Helena as the anticipation builds for the drop of thousands of yellow rubber ducks into the water and if you’re unfamiliar with the race, you should hope that the duck with your number crosses the finish line first.

Helena’s Buck Creek Festival is entering its 16th year and arguably the most anticipated event of the festival occurs on Saturday afternoon.

Along with being the most anticipated, the duck race is also the most significant fundraiser for the festival, which has donated more than $253,000 to local charities and civic groups through the festival’s 16-year history.

Anyone is allowed to sponsor a duck to be entered into the race and tickets are currently being sold at The Depot Restaurant and Regions Bank in Helena. Tickets may also be purchased the day of the race.

Those wishing to enter ducks into the race may purchase single duck tickets or a flock of ducks.

A flock of ducks consists of five ducks at a cost of $25 that also includes a Buck Creek Festival T-shirt. Single duck tickets are $5.

This year, the Helena High School Band Boosters will receive the funds raised from the duck race.

Last year, the band boosters received $12,495 and the goal is to once again help support the program.

The 2017 duck race will begin promptly at 3 p.m. on Saturday, May 13 and those who’ve been before would advise first timers to get there early to secure a good spot to watch all the action.