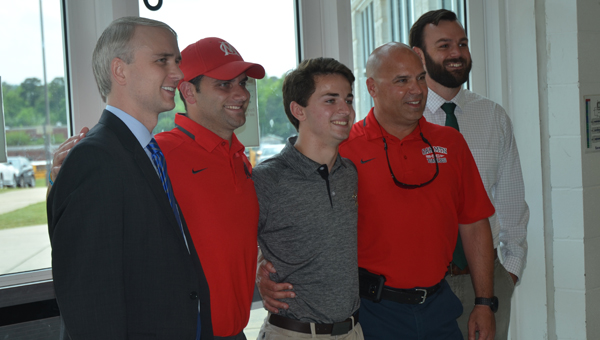 NORTH SHELBY – Though Caleb Van Geffen has yet to enroll at Vanderbilt University, he is familiar with the school and the track and field program he will join in the fall.

Jake graduates in May and will not compete with Caleb, but being able to be around the school and athletic program from Jake’s time at Vandy helped form Caleb’s college decision, which was based mainly on the university’s outstanding academic reputation.

“The campus is beautiful, and the student life was something that was important to me,” he said. “With my brother being there, I got to go behind the scenes, and I really liked all the guys that are already on the team. It will be pretty easy to jump in.”

Caleb Van Geffen will look to make his own mark after a decorated high school career that has included qualifying three out of four years for the state meet and earning All-State recognition two years.

Also, Van Geffen has been part of the Eagles soccer team that has won the state championship two consecutive years and is looking to make it three straight.

Van Geffen will compete in the 5K, 8K and 10K cross-country runs at Vanderbilt, and track events that have yet to be determined.

Dozens of family and friends attended Van Geffen’s signing ceremony in the school cafeteria, and former coaches talked about him.

“We are incredibly proud of Caleb, and I know just from the number of people here, he’s had a huge impact,” OMHS Assistant Principal Kyle Dudley said.

“People thrive off of your energy,” DeMasters said.

Track coach Jeff Burger said his relationship with Van Geffen has grown to the point of being close friends.

“You’re going to do so great at Vanderbilt,” Burger said.

“He came to practice every day and had his lunch pail, his hard hat and was just looking to put in work,” Fuqua said.