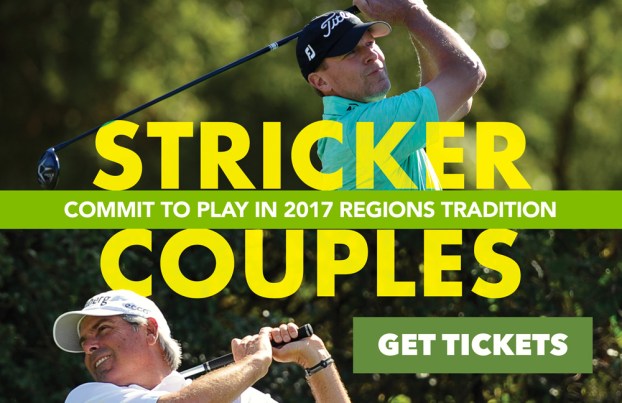 Fred Couples and Steve Stricker have officially committed to playing in the Regions Tradition at Greystone Golf & Country Club the week of May 17-21. (Contributed)

HOOVER – The Regions Tradition announced today that Steve Stricker and Fred Couples have both committed to play in the 2017 event, to be contested at Greystone Golf & Country Club the week of May 17-21.

Stricker, who is now eligible to play on the PGA TOUR Champions after turning 50 in February, will be making his debut at the Regions Tradition. He is a 12-time PGA Tour winner and has been named captain of the U.S. Presidents Cup team in September. He has played two PGA TOUR Champions events this year, finishing second at the Tucson Conquistadores Classic and tied for third at the Mississippi Gulf Resort Classic.

Couples, a World Golf Hall of Fame member, will compete for the fourth time in the Regions Tradition; however this will be his first time competing in the tournament at Greystone.

The 57-year-old won 12 times during a stellar PGA TOUR career, including the 1992 Masters Tournament and PLAYERS Championship titles in 1984 and 1996. Couples has 12 victories on PGA TOUR Champions as well, including two major championship wins.

In his four career Regions Tradition starts, Couples has notched two top-10 finishes, including a runner-up effort in the event’s 2013 edition.

“We are always holding our breath on Freddie, but we are thrilled to know that he is headed to Greystone,” stated Gene Hallman of the Regions Tradition. “Additionally, we are thrilled to have U.S. Presidents Cup captain Steve Stricker in attendance and we believe this is one of the most exciting fields we’ve had thus far.”

Other stars committed to the field are Bernhard Langer, Miguel Angel Jimenez, and Vijay Singh.  Both Jimenez and Singh will be playing at Greystone for the first time.

For additional information on tickets and volunteering for the Regions Tradition, visit www.regionstradition.com.

By ALEC ETHEREDGE | Sports Editor ALABASTER – The Kingwood Christian School baseball team is having a season of historic... read more