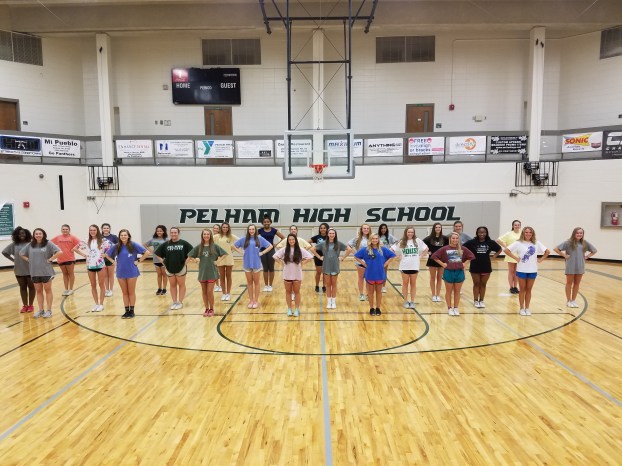 Pelham High School's cheerleaders are raising money to attend a cheerleading summer camp in May. (Contributed)

Right now, 20 percent of the money spent on a car was at Blue Rain Car Wash, located at 100 Little Mountain Circle, will go to the PHS cheerleading program, Coker said.

“All you have to do is mention the cheerleading team’s code when you go to get the car wash and they will give a percentage of your purchase to the cheerleading team,” Coker said. “We’ve been doing it so far for about three months and it will be ongoing throughout the summer.”

Beginning in May, the teams will be selling $25 Blue Rain Car Wash gift cards. For every gift card sold, the teams get $5.

Coker said the cheer program is in desperate need of some new floor mats.

“Our mats are in such bad shape,” Coker said. “We’ve had those mats since at least 1998 – maybe even farther back than that. It’s also a safety factor for the girls. They need good mats to jump and flip on.”

Coker said some of the money from the fundraisers will also go toward the cost of a cheerleading summer camp at the University of Alabama from May 30 to June 2.

Coker said he girls will learn new cheers, stunts and dances at the camp. They’ll also learn how to get the crowd involved and excited at games and pep rallies. At the end of the camp, the girls will be evaluated on their skills, which include sharpness of motions, voice projection, synchronization and much more.

There will be also be a cheer competition among the squads attending the camp.

“They will get to meet other cheerleaders from other areas and engage in some friendly competition,” Coker said. “It will be a really great experience for them.”

In the future, Coker said she would also like to purchase vaulting blocks and small trampolines for the girls to practice their skills on.

PELHAM – The Pelham City Council interviewed two candidates for the Commercial Development Authority board at its meeting on Monday,... read more