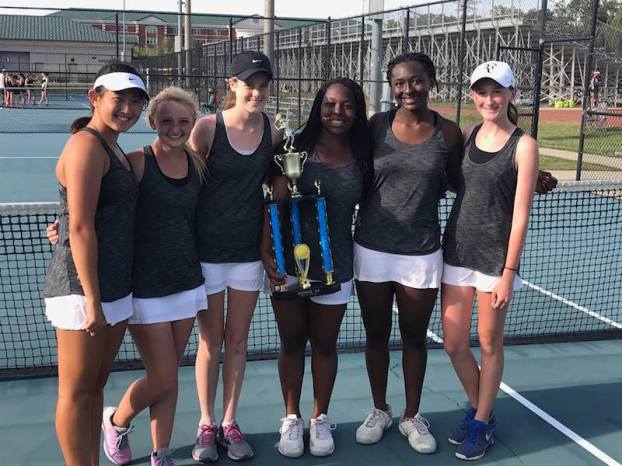 Spain Park’s girls tennis team has made program history by making it to their first ever state tournament after finishing second in the section tournament. (Contributed)

HOOVER – Spain Park’s girls tennis team only features three seniors on a 12-girl roster that includes four sophomores and four freshmen. That young team, however, didn’t stop the Jags from advancing to their first ever state playoffs in program history.

The Jaguars, along with Mountain Brook, advanced out of 7A Section 3, which also features Thompson, Hoover, Huffman, Oak Mountain, Tuscaloosa County and Vestavia Hills, after finishing second behind the Spartans in the section tournament on Monday, April 17.

“It’s a huge accomplishment for us,” Spain Park head coach Amber Lewis said. “It’s extra special not only because it’s the first time ever, which is something they can hold onto for forever, but also for Daryn (Ellison) who is a graduating senior that has really poured her heart and soul into this team.”

Ellison has been the starter on the No. 1 court for Spain Park since eighth grade and has made it to the state championship on an individual level for all but one of her five seasons with the Jags. Her and her sister, Sydney Ellison, are the only two with state tournament experience as they won the doubles state championship last year.

When you talk with coach Lewis, she will have a lot of high praise for the Ellison sisters, but more importantly, she will tell you that this entire team is special and she wouldn’t have wanted to experience this historic season with anyone but them.

“To try and create a team environment in tennis is very difficult because it is such an individualized sport,” Lewis said. “This year has been a very unique year in that the kids love each other and care about each other, and I don’t just mean the girls team or the guys team, I mean together collectively you can hear each of them cheering for one another.”

Lewis went on to say that in years past, when a certain players match was over she would be more likely to leave instead of stay behind and cheer on their teammates.

“In their minds, their court was done so in their mind they were done,” she said. “This year nobody leaves, nobody even wants to leave. I think that’s part of the success of this team that the individual mentality has taken a back seat to the importance of the team. I just really love that about this team.

This is the most fun season of tennis I’ve ever had and it’s because of their attitude toward the team.”

Spain Park finished the season with a 10-2 overall record that included tournament wins in the Chattanooga Rotary Tournament and the Auburn Invitational, both of which featured some of the best high school tennis teams from Tennessee and Alabama.

“That was our goal, and now we’re going to start over with our new goal which is the first match of the state tournament,” Lewis said. “We aren’t going to look past that, we just need to take baby steps and put one foot in front of the other and focus on each individual match that we can control.”

One thing is for certain, Lewis and the Jaguar team will be depending on the Ellison sister’s experience to help prepare them for the moment.

“The state tournament is a different type of pressure that they’ve never seen before,” Lewis said. “I’m hoping Daryn and Sydney can kind of exude some confidence and give the team some calmness.”

While Lewis said she fully expects her team to win a state championship because you don’t take the court if you don’t believe, she also wants her kids to know what a historic moment this is and to just enjoy the memories that they will create.

“The experience of the tournament is something they will take with them well past high school,” she said. “It’s not a one day or a one weekend thing, this is a lifetime thing. I’m almost like a proud mom in the fact that I am so excited for my kids to get that, win or lose, they are going to have that experience that nobody can take away.”

In front of them sits an opportunity, not just to make history (they’ve already done that), but to create more memories with a team that displays the definition of selflessness in such an individualized sport. The Jags will chase the state championship on Monday and Tuesday, April 24-25 at Montgomery’s Lagoon Park tennis facility.