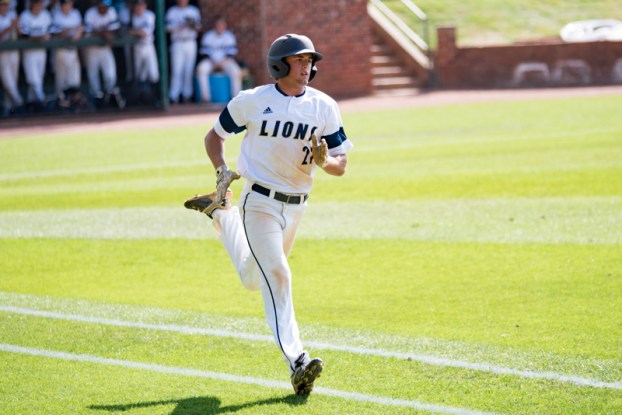 Briarwood picked up a sweep of Headland by outscoring the Rams 26-1 to advance to the second round of the 5A playoffs where they will face No. 2 Faith Academy. (Reporter photo/Keith McCoy)

NORTH SHELBY – A battle of the top two teams in Class 5A will ensue next weekend in Mobile after Top-ranked Briarwood Christian and No. 2 Faith Academy swept their first round AHSAA baseball playoff opponents April 21.

The Lions’ wins avenge being knocked out of the first round last season by Oxford.

“Boy that was tough,” said BCS head coach Steve Renfroe. “The guys that were on that team had never been knocked out of the first round. They are glad to get to move on to the next one.”

Briarwood opened the series against Headland (18-12) by scattering 13 runs over the first four innings of play in Game 1. Carson Eddy, who doubled in a pair of runs in the second, knocked in three more with a triple in the fourth inning to give the Lions a 10-0 lead. He finished the day hitting 5-7 with seven RBIs on three extra-base hits in the two games.

“It was an extra special day for him. He got us going and we turned him loose against the big guy and he tore it up with a big hit,” Renfroe said. “It seemed like he was on second base every time he swung the bat. If he gets hot, we’re going to be good.”

Hudson Hartsfield hit 4-for-4 in the first game, while Cole Steadman and Eddy were 2-for-4 and Sam Strickland was 2-for-3. The four players accounted for 10 of the Lions’ 11 hits. Kolby Kwarcinski had the other. Hartsfield and Steadman each drove in two runs, while Strickland knocked one in.

“It was just a real good day. We had great approaches from the start … We did a great job adjusting to their No. 1 guy and I think that got us going,” Renfroe said.

Strickland took the mound in the second game, allowing seven hits and striking out eight in the shutout. Briarwood took a 2-0 lead in the top of the first and added one in the fourth before posting five-run innings in both the top of fifth and seventh.

Hartsfield hit 3-for-5 in the second game with a pair of RBIs and Strickland was 2-for-4 with a pair RBIs. Steadman also knocked in a pair in the night cap, while Will Baumbach, Graham Core and Whittlesey each drove one in.

Briarwood hit .417 in the series with 25 total hits, including nine extra-base hits.

By Chris Megginson | For the Reporter COLUMBIANA – Cornerstone Christian came up two runs shy of playing another day,... read more