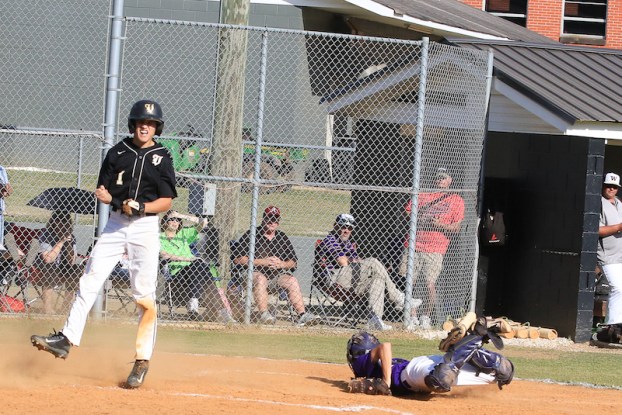 Vincent's Cole Fincher jumps up emphatically as he celebrates sliding into home plate safely after an inside the park home run in game one. (For the Reporter/Dawn Harrison)

Vincent advances to 2nd round of baseball playoffs

VINCENT – The Vincent Yellow Jackets (19-7) proved they belong in the 2A baseball playoffs on Friday night, April 21, and not in a subtle way. They annihilated Winston County from the first pitch of game one and didn’t let up the entire time of the doubleheader in the first round of the postseason as they took down the opposing Yellow Jackets by a combined score of 20-3.

In game one, it was a combination of Ethan Davis’ dominance on the mound and the rest of the team’s dominance at the plate as the Yellow Jackets went on to win 10-0 in five innings by way of the run rule.

After a 1-2-3 top half of the first for Davis, Cole Fincher came to the plate in the bottom of the inning and led the game off with a bang offensively as he legged out a leadoff triple. He scored during the next at bat when Saylor Carrol drove a ball deep enough to the outfield for a sac fly to give the Yellow Jackets a 1-0 lead. Robbie Albright was able to reach on a single and proceeded to steal two bases once on base, but he was stranded as Vincent failed to extend the lead.

Davis was able to pick up another 1-2-3 inning in the top of the third, which allowed his team to come back to the plate and add to their lead. In the first three at bats, Vincent was able to load the bases. Caemon Jernigan hit a sac fly for the first out of the inning and the Yellow Jackets’ second run of the game. A walk to Fincher loaded the bases again before Carrol hit into a groundout that scored their third run of the game to take a 3-0 lead after two.

In the top half of the third, Winston County was able to eventually load the bases with two outs, but Davis was able to get out of the inning with a groundout to the shortstop.

Vincent took advantage of the break and came back in the bottom half of the inning to score six runs and take a commanding 9-0 lead. The inning featured an inside the park home run from Fincher, three singles, a triple from Carroll and a double from Ryan Childers.

Davis kept Winston in check over the next two innings before Albright hit a sac fly in the bottom of the fifth to end the game at 10-0.

Vincent was able to put together an 8-1 run over the final four innings of play in game two to take down Winston 10-3 and complete the doubleheader sweep and seal a spot in the second round of the playoffs.

After a quiet inning-and-a-half to start the game, Vincent remembered that its offense was on fire as they put up a two spot in the bottom of the second to take a quick 2-0 lead.

Winston County finally had a spark lit under them and answered in the top of the third with two runs of their own to tie the game at 2-2 as they fought for their playoff lives.

Unfortunately for them, Vincent’s offense was just too much the entire night and it continued to show off in the bottom of the third as the Yellow Jackets went off for four runs to take a 6-2 lead. Vincent tacked on two more an inning later to extend their lead to 8-2.

Winston County added an additional run in the top of the fifth to attempt to cut into the Vincent lead, but it was two little too late as the Yellow Jackets added two more in the bottom of the sixth to win by the final of 10-3 and complete the two game sweep.

With the win Vincent will move on to the second round of the playoffs where they will travel to take on section April 28-29. Section won 4-0 and 3-1 over Sand Rock in round one.