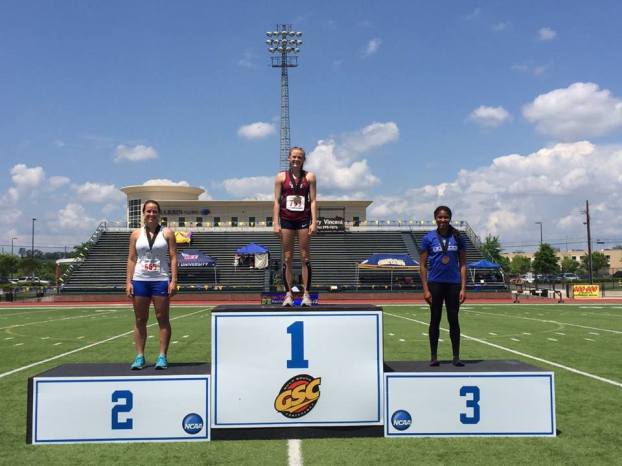 Jordan Allison, a former standout athlete for Pelham, stands atop the first-place podium after winning her first ever heptathlon for Lee University. (Contributed)

The Lady Flames used seven gold medal performances on Saturday to finish with 200 points and win the title by 34 points over their closest competitor. Shorter University was second (166) and Alabama Huntsville was third (162).

“The overall performance of the women’s team this weekend was so outstanding it cannot be adequately described in words,” Lee head coach Caleb Morgan said.

One of those spectacular overall performances came from former Pelham standout Jordan Allison. Allison, who won back-to-back indoor state championships with the Panthers in high school, placed fourth (1:05.32) in the 400-meter hurdles and helped the women’s 4×400-meter relay team finish in sixth with a time of 4:09.73.

“We had many athletes perform well above expectations,” Morgan admitted. “Jordan Allison competed in her first heptathlon ever and earned the GSC title after not competing for a year due to injury.”

Not only was it Allison’s first-ever heptathlon at the collegiate level, but any level of competition as she had never competed in one before.

In order to claim that championship title, she had to compete in the 100-meter dash, 200-meter dash, high jump, shot put, long jump, javelin throw and 800-meter run portions of the meet.

She finished third in the 100-meter dash, second in the 200-meter dash, first in her first ever high jump, fourth in shot put, third in long jump, third in javelin throw and first in the 800-meter run. Those finishes were good enough for 4,197 points, which was 29 points higher than Alabama-Huntsville’s Courtney Canady.

“Jordan exceeded expectations during the meet and her extraordinary effort has culminated in her being crowned the GSC heptathlon champion,” Morgan said. “Our entire team is very proud of and thankful for her as we went for the overall team title. We expect Jordan to continue to set a high standard for our team to follow well into the future.”

The Lady Flames finished the meet with the most medals. Lee won 10 gold, three silver and three bronze for 16 total.

Seven Lady Flames earned GSC First Team All-Conference honors by placing first in their individual events including Allison for her efforts in the heptathlon.

By Chris Griesedieck | Special to the Reporter NORTH SHELBY – The mercy rule was in full effect under the... read more