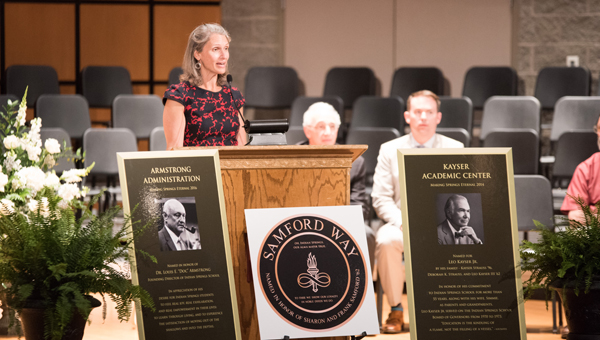 INDIAN SPRINGS VILLAGE – A dedication ceremony for two buildings on campus and a memorial walkway was a highlight of Indian Springs School’s annual Alumni Weekend.

Dewey Wilbanks, class of 2017 and school mayor, welcomed those who attended the ceremony on Friday, April 21 at the school’s concert hall.

“Welcome home; we’re really glad to have you,” Wilbanks said.

Head of School Sharon Howell introduced the speaker, ISS board member Alan Engel, for the dedication of Samford Way.

Frank Samford, class of 1962, attended with his wife Sharon.

Engel said the Samfords are the parents and grandparents of ISS alumni.

Kayser Jr. served on the Indian Springs School Board of Governors from 1970 to 1973, and Kayser III continues to serve on the Board of Directors.

Samford noted that Samford Way was named in his honor for his fundraising efforts.

“The reasons I made these efforts were entirely because of Doc,” Samford said.

Armstrong believed students should be active members of the community, Samford said and told stories about Armstrong’s approach.

In one story, Samford told how students during his time at the school questioned the implementation of rules about student life without consulting students first, as was required by school policy.

Samford said Armstrong admitted the mistake and pledged it would not happen again—and opined that such a resolution would not have occurred at “any private school other than Indian Springs.”

“Next to my parents, he was the most important adult in my life,” Samford said.

“Indian Springs was destined and designed to be a unique place,” Dillard said.

Closing remarks were given by Board of Directors member Fergus Tuohy, who thanked those who have contributed to the school.

“Contributions of more than $20 million for construction, infrastructure and endowment transformed the campus and ensured the future of the school,” Tuohy said. “There’s something magical about this place—something intangible.”

Alumni Weekend 2017 was held from Thursday, April 20 through Sunday, April 23.

In addition to the dedication ceremony, alumni were invited to sing with the ISS choir, attend a class, an alumni-faculty reception, a choir performance, campus tours, boys and girls varsity soccer games, reunion class parties and a 50th reunion brunch for the Class of 1967 and earlier classes.

SCS to focus on ‘development of the total child’

NORTH SHELBY – A “paradigm shift” for Shelby County Schools will mean a focus on the development of the total... read more