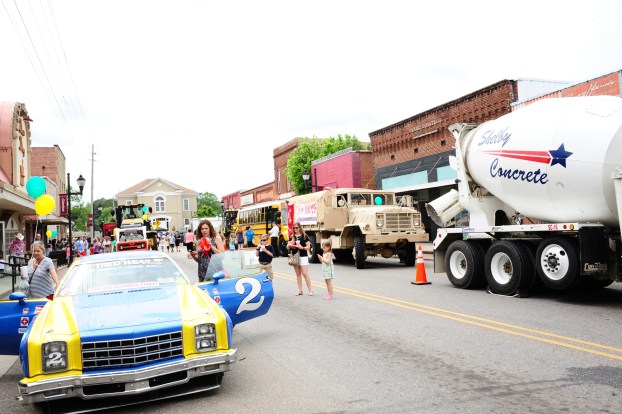 Parents and kids explored different types of equipment and vehicles during Touch a Truck on Saturday, April 22. (Reporter photo/Amalia Kortright)

COLUMBIANA- Different types of equipment, trucks and municipal vehicles lined South Main Street in Columbiana from 9 a.m. to noon at Touch a Truck on Saturday, April 22.

“It’s an opportunity for the community to come out and see a lot of the city’s larger vehicles and meet the folks who serve, maintain, build and protect our city,” Columbiana Main Street Director Bragan Feldman said. “Most of these vehicles are from businesses and agencies that are mainly in Shelby County.”

Touch a Truck also featured live music and vendors. Through Touch a Truck, the Shelby County High School cheerleading team and color guard were able to raise money by painting faces and selling snacks and drinks. Feldman also said it benefitted local businesses because it attracted so many visitors.

“It brings everybody downtown to see all that Columbiana has to offer,” Feldman said.

According to Feldman, the event was organized by Columbiana Main Street and Kyle Mims of Edward Jones. Mims originally got the idea after he saw another city hold a similar event.

Feldman said the event was free to the public and simply served to bring the community together.

“It’s an opportunity for us to give back,” Feldman said.

Parents Greg and Lisa Harper, of Calera, said Touch a Truck was a convenient, family friendly event that helped their children explore their imaginations. Their son, Jackman Harper, said his favorite part of Touch a Truck was being inside of the Shelby County Sheriff’s Office jeep.

“It was really cool that the kids had fun getting their hands on the trucks that they play with as toys,” Lisa Harper said.

“It was fun, free and nice down here. The kids can run around and climb inside of the vehicles,” Greg Harper said. “This is the one place where we don’t have to worry about them breaking everything.”

Feldman said this is the first Touch a Truck event that has been held in Columbiana, and Columbiana Main Street and Mims look forward to making it an annual event.

“We’re so thankful for everyone who has come out in support of our event,” Mims said.