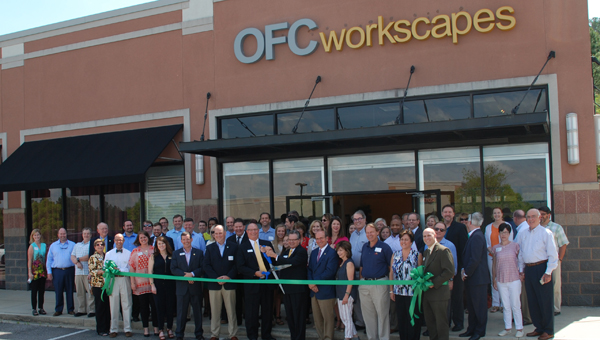 The Greater Shelby and Hoover Area chambers of commerce sponsored a ribbon cutting at OFC Workscapes on April 18. (CONTRIBUTED)

Company president Steve Gathings said he was happy to open his business in the area.

“This business is brand new,” he said. “We incorporated in October and have been in the space since January, but the grand opening was exciting.”

Gathings said his company will represent multiple lines of office furnishings and is the only such company “over the mountain.”

“Most office furnishings companies are in the downtown Birmingham area,” he said. “And we will also service downtown and the state of Alabama. I have some previous contacts in other states, so we will be helping there. But our primary focus is Shelby County and this part of Jefferson County.”

“What we want to do is offer guidance on space selection,” he said. “We dealt with a company lately that had three office locations from which to choose. We helped with life cycle costs, lighting and convenience, and then moved on to talk about space utilization once the actual site was chosen.

“We want to be involved as early in the process as possible when a business is moving, relocating, starting or remodeling.”

“What we say to our customers is let us give you the tools and information you need to make good decisions about your business,” he said.

In addition to OFC Workscapes, Gathings and Mitchell also created Postura Seating and have more than 70 different chair models in their showroom.

“This is really a fitting service,” he said. “We recommend ergonomic seating for efficiency and comfort.”

Gathings, a Birmingham native, began working in office equipment while a student at UAB. His career took him to Detroit for six years with the Steelcase Company.

“I actually lived in Birmingham, Michigan!” he said with a laugh. “Between us, we have over 50 years in office furnishings. Frank and I are excited about this new venture and we want to part of this community.”

INDIAN SPRINGS VILLAGE – A dedication ceremony for two buildings on campus and a memorial walkway was a highlight of... read more