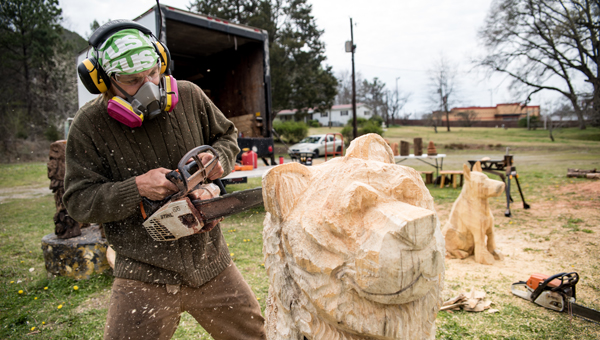 HARPERSVILLE – Joshua Gates saw the worst and the best of people in a matter of days.

After a chainsaw and valuable piece of art was stolen from Gates, a wood carver who has established a base of operations off Alabama 25 adjacent to Bigman’s restaurant in Harpersville, the New York state native experienced an outpouring of support from the community.

“The people here have taken me in,” Gates said.

An elaborate “Roll Tide” carving was stolen on April 15.

“It was a real serious hit for us,” Gates said. “That’s the tool I use to make my money with.”

The theft occurred between 6-7:30 p.m. on April 17 as Gates left in a rush to quote a stump carving project.

A police report was filed, but Gates has not heard about any progress in catching the perpetrator(s).

Gates posted about the incident on Facebook, and the post has been viewed more than 11,000 times, he said.

“I didn’t know a community could pull together like that,” he said.

Gates has taken some of his more valuable pieces to Woodlot Artisans in Pelham, which is selling them on an consignment basis and has even given Gates space to work when he is away from his Harpersville location.

Gates will eventually have to buy a new saw. He said he cannot afford one just yet but plans to save up money by doing smaller projects with other saws he owns.

By NEAL WAGNER / Managing Editor Several Shelby County communities are among the best places to live in Alabama, according... read more