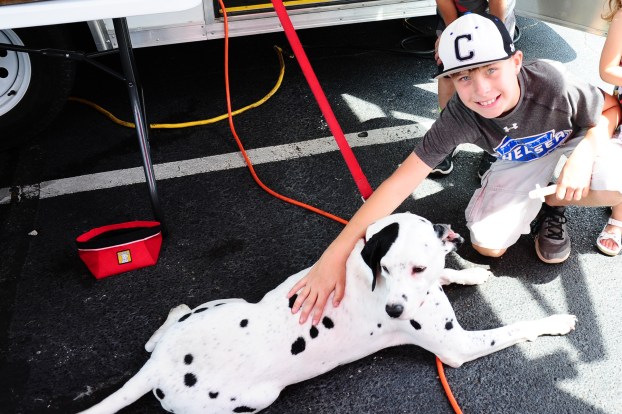 Proceeds from the 2017 Fire at the Foothills will benefit Hero the Firedog’s fire safety program, as well as other children’s programs. (Reporter photo/Amalia Kortright)

CHELSEA- Locals from Chelsea and nearby areas spent the day sampling chili and barbecue at the seventh annual Fire at the Foothills BBQ and Chili Cook Off on Saturday, April 22. The event was hosted by the Chelsea Kiwanis Club and lasted from 1 to 4 p.m. in the Tractor Supply Co. parking lot.

“It’s a great opportunity for the community to come out, meet their neighbors and have a fun, safe activity with the kids,” Kiwanis Club President Elise Hearn said.

Twenty-one teams were entered in the barbecue competition, which was judged by which team received the most tips from visitors. There were 11 entries in the chili cook off.

Pitmaster and Chelsea resident Stan Sartin said the event served as a good way to bond with other locals and raise money for a good cause.

“I like to be out and cook with the guys,” Sartin said. “This is great. We’ll do anything we can to help the community.”

Sartin, who has participated in Fire at the Foothills for years, said he has seen the community’s involvement rapidly increase.

“The first time I did it, we had about seven or eight teams. Now, there are more teams and more people,” Sartin said. “It has grown a lot.”

Proceeds from the chili cook off will fund the Chelsea Fire and Rescue dog, Hero’s, fire safety program.

Kiwanis Treasurer Mike Denton said this year’s event raised about $5,800, including entry fees from competitors and contributions from the public.

Shelby man arrested twice in a week on drug charges

COLUMBIANA- A Shelby man was arrested and charged with possession of drug paraphernalia and possession of a controlled substance with... read more