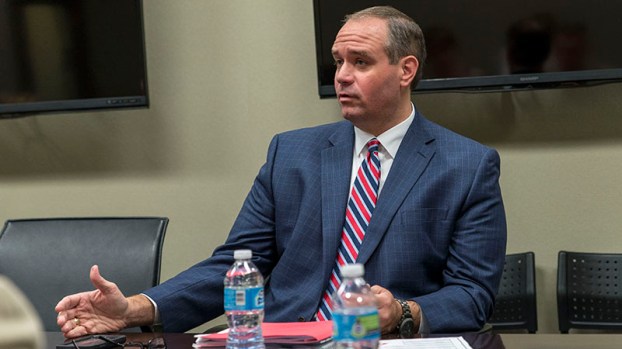 Alabaster Board of Education President Adam Moseley, shown here during an April 11 City Council interview, was reappointed by the council to another five-year term on April 24. (Reporter Photo/Neal Wagner)

ALABASTER – The current president of the Alabaster Board of Education will continue to serve on the board for the next five years after the City Council reappointed him during an April 24 meeting.

Council members voted unanimously during the meeting to reappoint Adam Moseley to another five-year term ending in 2022. Ward 2 Councilman Rick Ellis nominated Moseley for reappointment, and no other nominations were made.

Moseley, a former City Council member, has been serving on the School Board since 2012, and has been board president since 2013. He works in corporate communications at Blue Cross Blue Shield of Alabama, and has multiple children attending Alabaster schools.

The reappointment came about two weeks after council members interviewed Moseley and fellow School Board candidates Margaret Dawson, Nick Kopp and Edward Merrell for the seat on April 11.

Following the interviews, council members ranked each candidate and sent their selections anonymously to City Manager Brian Binzer before making the appointment.

During his interview, Moseley said he is proud of the progress the School Board has seen over the past several years, and said the district’s accreditation report, which had higher scores than surrounding school systems, is one of the system’s biggest accomplishments.

“Everything we said we were going to do when we started the school system, we’ve done, from facility upgrades to test scores,” Moseley said, noting the school system has tripled enrollment in Advanced Placement classes, and as a result has placed a higher emphasis on professional development for teachers. He said the school system creates well-rounded students by having a wide range of academic and extracurricular offerings.

He said he works to hold the school superintendent accountable while working with him to serve the city’s children.

INDIAN SPRINGS VILLAGE – A dedication ceremony for two buildings on campus and a memorial walkway was a highlight of... read more