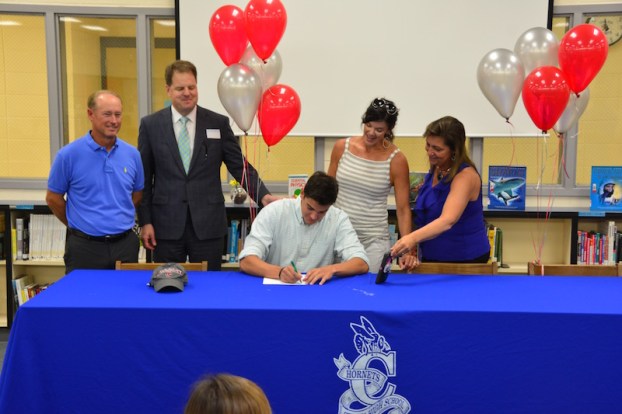 CHELSEA – Anytime a high school athlete signs a letter of intent to be a part of a college athletics program it is always a special moment, but when you become the first to do it in a particular sport, it becomes more than a special moment; it becomes history.

Chelsea’s Sam Barrett made history when he signed on the dotted line during a signing ceremony at Chelsea High School on Tuesday, April 25, making him the first male tennis player from from the school to sign a college scholarship.

Barrett was a tremendous leader on this year’s tennis team and really helped paved the way for all of the success they had. He will now be leaving behind the white and blue as he moves on to Coastal Alabama Community College to continue his playing and academic career.

“When I was younger I never really thought about this day, but now that I’m older, I realize how big of an impact something like this can have on your life,” Barrett said. “It sets up my future and what I want to do in life.”

It not only sets up his future, but also transcends this Chelsea program to make future players that come through the Hornets’ growing tennis team want to work hard so they can accomplish this type of success as they chase after their dreams.

“Hopefully this shows people it can be done and that if you work for it and really try, you can achieve something like getting a scholarship,” Barrett said. “It makes me proud knowing that other people see that and know they can do it too.”

When asked who helped him get to this point in his career, it took a split second for Barrett to say “that woman,” as he pointed across the room to his mother looking on.

“She gives me all of these contacts and people that I need to go hit balls with,” Barrett said. “She just helps push me to get better and be not only the best tennis player I can, but the best person I can be.”

At 6-foot-4, Barrett has the athletic build that is key to success, but he is so much more than an athlete as Steve Faulkner would tell you.

“He’s been an amazing young man over the two years I’ve had the privilege of working with him,” Faulkner said. “He’s been a leader of the team that has set an example both in the classroom and on the court.”

Faulkner is the Director of Tennis at the Greystone YMCA and has been instrumental in not only helping teach Barrett, but also helping teach an entire group of kids that are part of Chelsea High School’s boys and girls tennis teams.

He went on to add that there has been one major improvement for Barrett during his time at Chelsea.

“I think his attitude, work ethic and desire to win all have improved,” Faulkner said. “He has that never give up attitude to where he’s going to fight through adversity even when things aren’t going his way.”

Barrett will be joining a Coastal Alabama team that is losing three player’s from this year’s class, and he will be play an integral part in stepping in to replace one of those spots.

“I love this sport and I’m so excited to get to keep playing it,” Barrett said. “It’ll be so much fun trying to continue to get better and work toward meeting my goals.”

As for his long term goal, Barrett hopes to get into the medical field one day saying that he wants to “help people one day,” before laughing and saying he doesn’t know if tennis or saving lives will be more difficult.