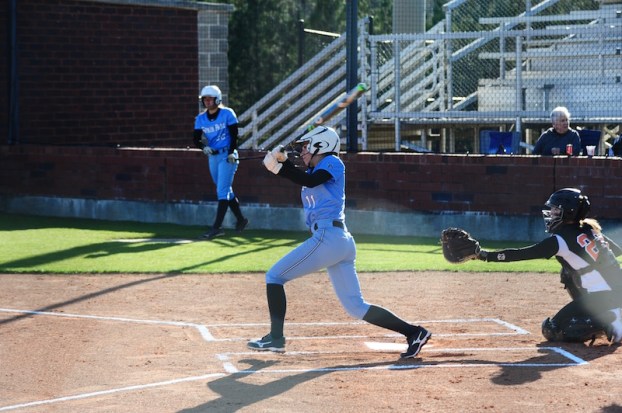 Jenna Olszewski was responsible for three of Spain Park’s five runs after she hit a three-RBI triple in the bottom of the sixth inning. (Reporter photo/Alec Etheredge)

HOOVER – After losing three of their last four games, the Spain Park softball team was on a downward trend but this is still the same team that started the 2017 season with 22 consecutive wins and has been ranked no lower than No. 2 this entire season.

That team showed up on Monday, April 24, when the Jaguars played host to 1A No. 2 Sumiton Christian in a two-v-two matchup.

The scoring was scattered throughout the game and despite being outhit 8-4 and trailing 2-1 at one point, Spain Park was able to claw its way to a 5-2 win to move to 35-5 this season.

After Annabelle Widra picked up a 1-2-3 inning in the circle to start the game, the Jags came to the plate in the bottom of the first looking to make the first move, and they did just that as Mary Katherine Tedder drove a two-out solo home run over the left field wall to give her team the early 1-0 lead.

Widra was able to get Sumiton out with relative ease yet again in the top of the second inning, but ran into a more aggressive team in the top half of the third. With two outs in the inning, Savannah Langston started the Eagles’ threat by laying down a bunt up the third base line that she was able to leg out for a single.

Jenna Ergle followed with one of the longest at bats of the game. Finally, on the seventh pitch of the at bat, Ergle found her pitch drove it deep over the right field wall as she erased the deficit with one swing of the bat and gave Sumiton a 2-1 lead. Taylor Whisonant put together the Eagles third straight hit in the following at bat, but they were unable to bring her home as Widra got the final out of the inning.

Spain Park wasn’t putting together big innings offensively speaking, but they were doing enough to hang around and in the bottom of the third, the Jags answered with another solo home run, this time from Maddie Majors, as she helped tie the game up at two apiece.

This score held strong until the bottom of the sixth as neither team threatened over the next two innings.

The Jaguars started the sixth with Majors being hit by a pitch. That was followed by a double from Julianna Cross and a Tedder walk to load the bases with no outs. I’m sure Jenna Olszewski was coming to the plate thinking how nice hitting the Jags’ third home run of the game would have been in this situation, but instead she would have to settle for one less base as she legged out a bases-clearing triple to give Spain Park the 5-2 lead and complete the game’s scoring.

All of the Jags’ hits came from the top four batters in the lineup as Majors, Cross, Tedder and Olszewski were responsible for their four hits in the game, all of which were extra base hits.

Widra picked up a the win in the circle throwing a complete game allowing eight hits and two runs while striking out eight.

Chelsea takes down No. 1 Springville

By ALEC ETHEREDGE | Sports Editor SPRINGVILLE – By no stretch of the imagination is the 2017 Chelsea softball team... read more