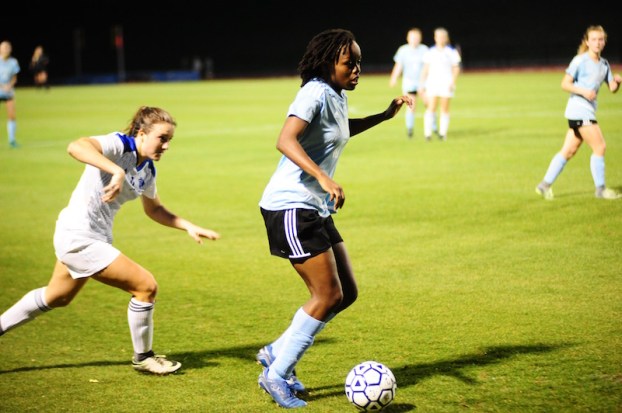 Spain Park's Jasmine Greene scored the Jags' five goals of the game as they were able to hang on to win 6-4 with a playoff spot on the line. (File)

MOUNTAIN BROOK – Last week, the Spain Park and Mountain Brook boys soccer teams faced off on the pitch fighting for a spot in the 2017 7A state playoffs. A week later on Tuesday, April 25, it was the girls’ turn. Either win and find a spot in the playoffs, or lose and your season comes to an end.

Almost identical to the boys traveling to the Spartans’ place and pulling off the 5-2 upset of the No. 2 team, the girls pulled off the same feat by taking down Mountain Brook 6-4 on the road to keep their season alive and clinch a berth in the playoffs.

Jasmine Greene has been a leader and by far the Jags’ scariest offensive threat throughout the season, and in this matchup she came in determined for her team to find a postseason spot. She wasn’t just the team’s leader in this one, she was their entire offense.

She didn’t just have one goal, or two, or three, or four, but five of Spain Park’s six goals came off her foot. While a hat trick would’ve kept her team close enough to compete, she had different ideas and left nothing to chance by beating the Mountain Brook defense all night.

Greene started her dominance in the first half by being responsible for the only two goals of the half. She put the team up 1-0 in the early going and around 20 minutes later was able to make the lead 2-0 off a cross pass from Madison Cobb. They would go into the half with that two-goal lead.

The second half got rather interesting. Spain Park came out and kept their tempo up and Greene scored her hat-trick goal with 28:54 remaining to give her three unanswered goals as the Jags led 3-0.

Mountain Brook answered by putting their first goal on the board a little over eight minutes later after turning up the offensive pressure to cut the Jaguar lead to 3-1.

Less than three minutes later, Greene found the back of the net yet again, which had become the norm in this game to put Spain Park back up by three at 4-1.

Nine minutes after scoring her fourth, she added her fifth goal of the game to give the Jags a commanding 5-1 lead as she had scored all five of their goals in a jaw-dropping performance.

While Greene was having a historic night on the field, Mountain Brook wanted to create a different storyline, one that featured a four-goal comeback.

With nine minutes left, down by three, it was definitely going to take a comeback for the history books if the Spartans wanted to keep their season alive and advance to the 7A playoffs, and boy did they come close.

Over the next two minutes, Mountain Brook switched into a completely different gear and incredibly put three goals on the board to get within one at 5-4 with 6:48 remaining in the game.

All of a sudden, the Spartans were right back in the match and had a strong chance of storming from behind before Kayla Wiggins put the dagger in the back of the net with 5:59 left to give the Jags a 6-4 lead, which they were able to hang on to.

Greene’s five goals matches one of the performances of the year by Hailey Whitaker who put up five goals against Spain Park in a matchup earlier this year. Briarwood’s Sarah Adcock has also had some spectacular games.

The celebration for Greene and Spain Park will be short lived, however, as they have to travel to take on No. 1 Vestavia in the first round. The Rebels have only lost one game this season and are considered the favorite to win the 7A state championship in a couple of weeks.