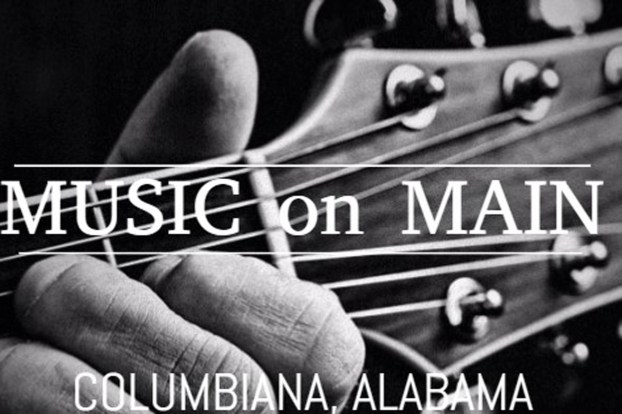 A different musician or band is slated to play every Friday evening in May during Columbiana’s annual Music on Main event. (Contributed)

Music on Main coming back in May

COLUMBIANA- Musicians will take the stage on Main Street in Columbiana for the annual Music on Main event, which will take place every Friday, from 6:30 to 8:30 p.m., in May. According to Executive Director Bragan Feldman, this is the first year that Music on Main will be hosted by Columbiana Main Street.

“It was originally started by local merchants. They’re all part of Columbiana Main Street now, so they’re still hosting it,” Feldman said. “It’s so great for us to be in an area where we can block off Main Street and set up a stage. A lot of other places can’t do that.”

Music on Main will kick off on Friday, May 5, with Birmingham-based, Americana band Rollin’ in the Hay. Feldman said the band “has a huge following.”

On Friday, May 12, the Shelby County High School class of 1997 will host their 20th reunion alongside a performance from the Derek Sellers band.

The show on Friday, May 19 will feature Beatles cover band NOYOKO.

Local musician Randy Glenn will play alongside a celebration for the state of Alabama’s 200-year anniversary on Friday, May 26.

“We’re partnering with Alabama 200 for this,” Feldman said. “It’s Memorial Day weekend, so it’s going to be a very patriotic celebration.”

According to Feldman, this will also be the first year that local restaurants, including Davis Drug Co., Tin Top BBQ and Coconut Girl, will act as food vendors during the shows. Feldman said Bernie’s on Main Street has also acquired a license to sell craft beer and wine to visitors.

“We decided to take it up a notch, and we wanted to see what we could add to it,” Feldman said.

Columbiana Main Street is offering giveaways for front-row VIP seating for each show on their Facebook page. Winners will be announced at the South Shelby Chamber of Commerce luncheon on Wednesday, May 3.

COLUMBIANA- Ever since the deaths of their children, Guy and Terri Allbrook and Karen and Jimmy Crane have felt compelled... read more