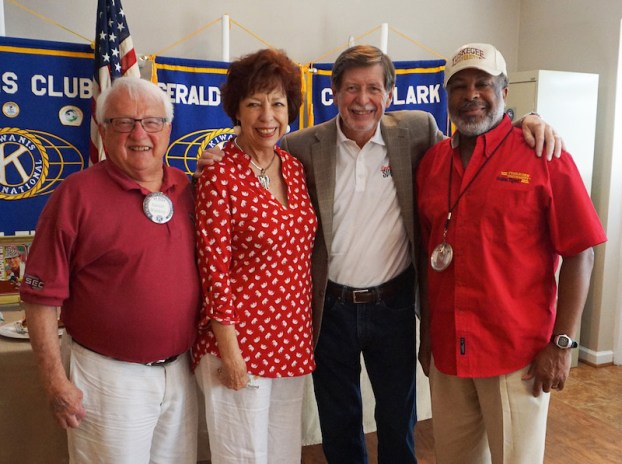 Dr. Gerald W. Waldrop, is pictured here with wife, Callie, commentator Lyn Scarbrough and past Kiwanis president, Luther Jarmon. Waldrop was the charter president of the Helena Kiwanis Club and spearheaded the building of the Kiwanis “All Kids” Boundless Playground at Joe Tucker Park, passed away from histoplasmosis pneumosis in October 2016. (Contributed)

Remembering the life of Gerald Waldrop

As a friend of the late Gerald Waldrop, I recently came across this writing in my files and wish to share in his memory.

It was titled: AN EASTER EPISTLE: Glencoe, Alabama by Gerald Waldrop, written in 2014.

And came with the humorous “WARNING: Long Read. May Bore Some.”

“Other than Easter Sunday, March 31, 2002, when Callie Virginia, my granddaughter, was born, yesterday was one of the best Easters in memory. Almost a perfect day to be alive,” Waldrop began. “Weather wise, Sunday was glorious from sunup to sundown. Now don’t take it that I went to Easter Sunrise Service because I am not a morning person. I am nocturnal. The possums and I would get along fine.

“When I had my pacemaker surgery last Monday, Brother John (John Simmons, UMC, Jacksonville, Alabama) came, prayed and stayed with Callie until I was out of the woods.”

That Easter, Waldrop and others who felt so moved at Jacksonville UMC, rose to sing Handel’s Hallelujah, with the choir. Waldrop notes that he hadn’t realized how much he missed being in the choir, which was a previous activity for 34 years in Attalia, Alabama.

Later they attended the Fifth Anniversary party of the Little River Canyon, where they were seated next to Randy Owen (and wife Kathy) of the band Alabama.

“Man, was I in hog heaven,” Waldrop said. “I wanted him to sing ‘Old Flame,’ ‘My Home’s in Alabama’ and ‘Dixie Land Delight.’ The thing I most admire about Randy Owen, also a JSU graduate, was that as he became famous he chose not to move to New York, Los Angeles and/or Nashville but to stay true to his roots on Lookout Mountain. Unlike many who achieve in some way, Randy Owen has never forgotten where he came from nor the people he grew up with. That is a most admirable trait in anyone.”

Waldrop mentions Randal Cole and his wife Barbara Smith Cole, leading to this memory: “Barbara had a young lady friend named Callie NetaVee Edgar of Glencoe and both were active in the Wesley Foundation. On Sunday nights the student group at Wesley would cook a meal for any hungry types that wanted to come and eat. I was always looking for free food on Sunday night.”

As they sat down to eat spaghetti, Callie Edgar was across the table.

“I had seen her on campus but did not know her until that night,” Waldrop recalled. “Callie has always said she knew me before I knew her. She always called me the ‘Big Man on Campus’ as I was president of the Student Government Association. Callie was a freshman and I was a senior getting ready to head to the School of Law at Alabama that fall (1964).

“Later I ran into her at Lake Rhea, asked her for a date and the rest is 50 years of history that produced two wonderful daughters, two sons-in-law, five grandchildren and a 95-year-old mother-in-law.

“Easter Sunday, April 20, 2014, was indeed memorable. On top of that, Jesus Christ rose from the dead to complete the story of salvation,” Waldrop’s writings concluded.