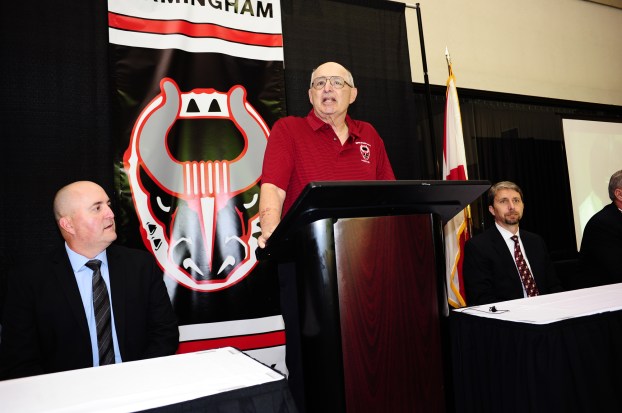 The Birmingham Bulls are back

PELHAM – General partner Art Clarkson announced at a press conference held at the Pelham Civic Complex and Ice Arena on Wednesday, April 26, that the professional hockey team coming to Pelham will be named the Birmingham Bulls.

The Birmingham Bulls, which will be a part of the Southern Professional Hockey League, will make its return to the world of professional hockey in late October with 28 home games being played at the PCC, Clarkson said. The team’s season will begin the last week of October and end the first week in April.

Clarkson said games dates have been submitted to the SPHL and a schedule is in the works. Getting the team ready to play by October will be a tight turn-around, but Clarkson said he can handle it.

“We’re going to get it done,” he said. “Is it easy? No, but I’ve been in challenging situations like this before. We’ll get it done.”

Clarkson said he is in the process of hiring a coach right now and then the coach will take the lead on getting a team together.

Pelham Mayor Gary Waters said the city has been working to toward the goal getting a hockey team for the past three years.

“Three years ago the timing and opportunity weren’t perfect,” he said.

With the city’s youth and adult hockey leagues growing more now than ever before, Waters said now is the perfect time.

“For the city, this is the most logical next step we can take,” he said. “It took a lot of phone calls and a lot of trips to make this happen.”

City Council President Rick Hayes said the coming of a hockey team marks the culmination of a long-term plan for the PCC. When the facility was built 20 years ago, it was with the idea that one day it would be the home of a professional hockey team, Hayes said.

To accommodate the Birmingham Bulls, which is owned by the Birmingham Hockey Club LLC, the PCC will undergo a major renovation to add about 2,000 more seats and some meeting rooms and box seats, Hayes said. Right now the main ice arena holds about 3,000 people, but the city is hoping to increase that number to about 5,000 people.

“This is an exciting time for the city of Pelham,” City Councilwoman Mildred Lanier said. “The city’s partnership with Art Clarkson is a tremendous opportunity and I’m looking forward to working with the Birmingham Bulls.”

SPHL president Jim Combs said he is looking forward to providing sustainable and affordable family entertainment for the greater Birmingham area for years to come.

“Not only that, the SPHL gives players and coaches the a chance to get the experience they need to make it to the next level — the National Hockey League. We hope to continue providing that platform for them.”

Clarkson said the Bulls’ office at the PCC will open May 1 and season tickets will be on sale.

“We worked hard to get to this point, but now we have to work even harder to make sure this team is successful and adds to the quality of life for residents.”

Pro wakeboarding coming to OMSP in May