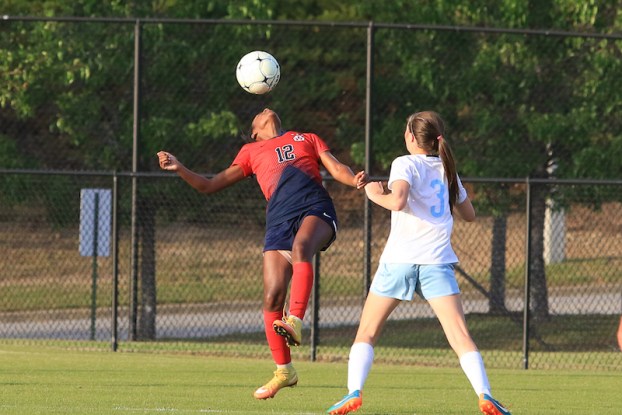 Eight girls teams from Shelby County will be competing in the 2017 state soccer playoffs. Oak Mountain and Spain Park are two of those as the Eagles look for their third in the last six years. (For the Reporter/Dawn Harrison)

While there were no girls soccer teams to that won a state championship a year ago, there were plenty of good teams with great opportunities and that remains the same this year.

There will be a total of eight girls’ teams from Shelby County looking to end that year-long drought as the last champion came by way of Oak Mountain back in 2015. Those eight teams include Oak Mountain, Spain Park, Chelsea, Helena, Briarwood, Calera, Indian Springs and Westminster at Oak Mountain.

Here is a playoff preview and look at each of those eight team’s first-round matches.

Oak Mountain: The Eagles have won three state championships over the last five years and have been by far the most explosive and consistent team I have seen this year. At 18-2-2 their record proves the talent level they have as they sit as the No. 3 team in Class 7A.

Oak Mountain will have a tough go of it and will have earned a state championship if they make it that far as they sit in the toughest section of the bracket. That starts with a first-round match against No. 5 Hoover at home on Tuesday, Mary 2, at 5 p.m. The Eagles topped the Bucs 4-1 in their season opener, but starting against the state’s fifth best team is tough. If they get by that game they should make it to the semifinals where they’ll have to square off against a tough No. 1 Vestavia team. I fully expect this team to make it to Huntsville and the Final Four where anything is possible.

Spain Park: Before Oak Mountain reeled off three state championships in five years, Spain Park won three in a row. The Jags sit at 13-6-1 overall this season and have already played a playoff game of sorts having to beat Mountain Brook to claim a spot in the postseason.

Things will get more difficult in the first round, however, as they have to travel to take on Vestavia, who has lost just one game this entire season. That game will take place on Tuesday, May 2, at 5 p.m. as the Jaguars look to avenge a 3-1 loss to the Rebels back on April 11. Spain Park will probably fall in the first round, but should they get past Vestavia, another top 10 team will await the next week.

Chelsea: After an average start to the season, the Chelsea Hornets have won seven games to end the regular season. Those seven wins came by a combined 48-4 as they have really clicked into another gear and shown they are one of the best 6A teams around.

The problem for the Hornets is that they get one of the toughest matchups they could’ve possibly gotten in the first round by having to host No. 2 Homewood on Friday, April 28, at 6:30 p.m. The Patriots have gone 8-1-1 in their last 10 as they have also been playing strong of late. They do tend to play lower scoring games, which could bode well for the Hornets, however. It will be tough for Chelsea to make it to Huntsville though as they would have to also face No. 1 John Carroll in the third round even if they make it by Homewood.

Helena: Speaking of John Carroll, that’s who the Helena Huskies get the privilege of playing in round one. The Cavaliers have won five in a row to end the season by a combined 27-1 to show their dominance.

Helena finished the season with a record of 7-13-2, but have won four of their last five games to start clicking at the right time. They will take to the field on Friday, April 28, at 5:30 p.m. with John Carroll as the clear favorite to win. It should be an early exit for the Huskies, but you never know this time of the year.

Briarwood: The Lions have lost just two games since March 3, and have proven themselves as one of the best 5A teams in the state after finishing with an overall record of 10-5-3 and a ranking of No. 3.

Just like the boys side, it would be a strong disappointment if this Briarwood team didn’t make it to Huntsville this year. They benefit from the easiest bracket out of any classification and will start with a 2-7 Demopolis team at home on Saturday, April 29, at 4 p.m. A second round matchup with Trinity Presbyterian would be their toughest game before the semifinals, meaning this team has the strongest chance of any girls team to win a 2017 state championship.

Calera: The Eagles by no means have had the strongest of seasons, but they are in the postseason which is all that matters. They have lost three in a row to end the season, but the regular season is out the window now.

Calera will travel to take on Sipsey Valley in round one on Saturday, April 29, at 11 a.m. Sipsey has won 10 of their last 11 games and is the clear favorite in this game. If the Eagles can get by their first-round game, there’s a possibility they could get to the third round, but it will take a strong effort to do so.

Instead they get to play each other in the first round and not only that, they are placed in the same side of the bracket as the other two top four teams in Holy Spirit and Montgomery Academy. Westminster is 12-5 on the season, while Indian Springs is 14-4-2 after winning six in a row to end the season by a combined 29-2. Right now Springs is playing their best soccer of the season, but Westminster won the only matchup of the season between the two 4-1.

The winner will move on to most likely face No. 3 Montgomery Academy in round two, before having to square off against No. 1 Holy Spirit in the semifinals. It’s a tough path for both teams, but whoever wins this one will prove they have what it takes to get it done.