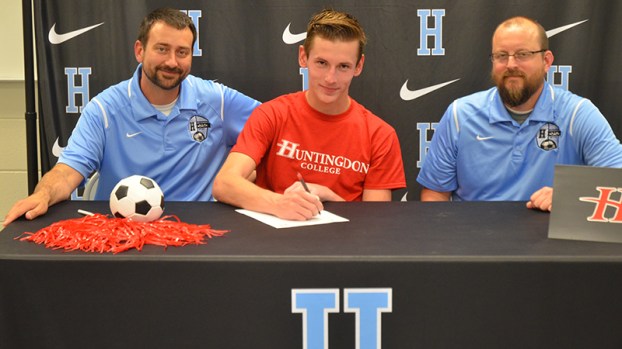 During that timeframe, the Helena High School boys soccer program has made the playoffs for the first time, won its first-ever 4A-5A state championship in 2016, competed in Class 6A for the first time in 2017 and now Beery has become the first player to sign a college soccer scholarship in program history.

On Wednesday, April 26, Beery signed a scholarship with Huntingdon College to continue his academic and athletic career.

When asked how it made him feel to be the first player in the Helena soccer program to sign a college scholarship, Beery said he felt like he “started a tradition.”

“It makes me feel like I started a tradition and that I hope that other players after this can follow suit,” Beery said. “I look forward to just continuing on my season and just getting my education.”

While playing goalkeeper for Helena, Beery amassed 78 saves for an average of 4.9 saves per game in 460 minutes of action. He also recorded one assist.

Beery was surrounded by family, friends, coaches and teammates at the signing in the Helena athletic field house on April 26 and said the main thing about playing for the Helena soccer program is that it’s taught him balance.

“This program has taught me a lot of team building and a lot of focus,” Beery said. “Otherwise I wouldn’t of focused so hard in school and soccer at the same time.”