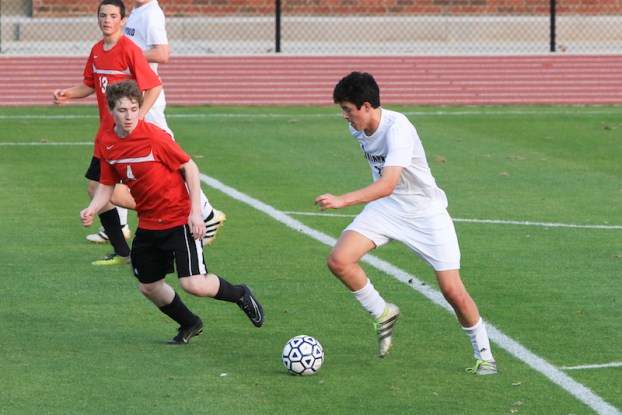 Briarwood will be one of eight teams looking to make a run at a state championship as the soccer playoffs kick off. The Lions have one of the easier brackets and should be able to make a good run. (For the Reporter/Dawn Harrison)

Last year two boys soccer programs from Shelby County were able to bring home blue maps to the county as Oak Mountain and Helena were both able to grab a hold of the state championship in Class 7A and 5A, respectively. This year Spain Park, Pelham, Briarwood, Calera, Indian Springs and Westminster will be looking to do what the Eagles and Huskies did last year, while those two look to do one of the hardest things in sports, repeat as champions.

Below we will look at each team’s chances of winning it all as well as their first round matchup.

Oak Mountain: The Eagles have been the best team across the state this season with a record of 16-4-4. As mentioned before, they are looking to repeat as state champions, which can add a little more pressure.

Out of the seven other teams in their portion of the bracket, Oak Mountain has six of the top 12 teams in the state, meaning they will have to face a tough three games before making it to the state championship final. That test starts with No. 8 Hoover in the first round at home on Tuesday, April 2, at 7 p.m. They beat Hoover 1-0 and tied the Bucs 0-0 during the regular season. The Eagles have probably the best chance out of anybody to bring home a championship and will not be surprised if they repeat.

Spain Park: The Jags may be playing the best soccer of anyone in the state right now having gone 8-1-1 in their last 10 games of the season including a crucial win over Mountain Brook to make the playoffs.

Spain Park is in the same portion of the bracket as Oak Mountain, meaning they have a tough path ahead and it starts with No. 2 Vestavia on the road in the first round. That game will start at 7 p.m. as the Jaguars look to continue their great play. They will probably fall in the first round, but if they do somehow get by the Rebels they’ll be a scary team moving forward.

Pelham: The Pelham Panthers have been the No. 1 6A team for 90 percent of the season and are the clear favorite to win the state championship in that division after storming through the regular season with a record of 17-6-1.

The Panthers get a John Carroll tam in the first round at 7 p.m. on Friday, April 28, that is 5-12-4, meaning they should be able to handle them with ease and move on. They do play in the tougher of the two brackets, but if they make it by Northridge in the second round they should coast until a potential matchup with Northview in the semis.

Helena: The Huskies haven’t had nearly the season they wanted after winning the state championship last year, but have been able to battle to a 10-11-1 overall record and a spot in the playoffs, which is all that matters.

They get No. 8 Homewood in the first round on Saturday, April 29, at 1 p.m. This will be the first meeting between the two this season and I expect Homewood to win, but this Helena coaching staff knows how to prepare for a playoff game.

Briarwood: At 13-5-3 this Briarwood Lions squad is a scary one. They may not have the amount of games that some do, but they have a team that has won or tied in 14 of their last 16 games.

They have a first round matchup with Demopolis on Saturday, April 29, at 6 p.m. to start their postseason run and honestly ending before the semifinals would be a disappointment for this team. While the other teams mentioned so far have been placed in tough brackets, the Lions are on the opposite end of the spectrum, with only one top 10 team in their path to the Final Four in Huntsville, that would be No. 10 Loveless Academy. What happens at that point is a toss-up, but this team is one of the favorites next to Oak Mountain to bring home a title.

Calera: The Calera Eagles sat in the same area as Briarwood finishing second behind the Lions. The Eagles have had an up and down season that ended with losses in three of their last four games, but they battled to an above .500 record at 10-9.

They, like Briarwood, benefit from a weaker side of the bracket. Calera will travel to Holt in the first round on Saturday, April 29, at 7 p.m. where they will meet a 6-13 team. This should be a good game in the first round, but I expect Calera to sneak out an advance. They would most likely face a good Loveless team in the second round, which is where I think they will fall.

Indian Springs: For the last four weeks of the regular season Indian Springs has been the No. 1 team in this classification and for good reason. Springs ended the season with an overall record of 18-2-6 and has won or tied for 17 straight games not having lost since back on March 4.

They will host a good Holy Spirit Catholic team in the first round on Tuesday, May 2, at 7:30 p.m. There are a handful of teams that can win this classification making it hard to predict what will happen, but Indian Springs and Westminster have two of the best shots and I think will meet in the semifinals with the winner going on to win the state championship.

Westminster at Oak Mountain: Before Indian Springs turned up the heat, Westminster was the No. 1 team and for a little more than half the season. They lost a couple of games in their last three to end the season showing how strong good they have been with an overall record of 18-4-3 this season.

They host Prattville Christian who is 7-7-1 in the first round on Monday, May 1, at 5 p.m. All of the Knights losses this season have come to teams in the top 10 of the 6A and 7A classification showing they can compete with anyone and could easily dominate this classification on the way to a state championship. It’ll come down to a matchup with Indian Springs in the semifinals.