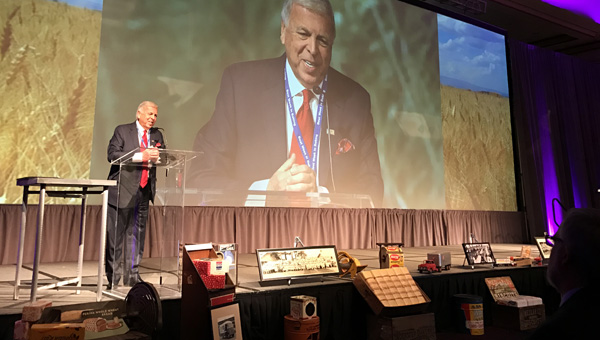 Bud Cason, founder and chairman of Bud’s Best Cookies, gives an acceptance speech at the Chicago Hilton for his induction into the Baking Hall of Fame. (CONTRIBUTED)

HOOVER – Bud’s Best Cookies have long been favorites locally and across the country, and the company’s founder and chairman, Albert L. “Bud” Cason, was recently recognized by his peers in the baking industry.

Cason was inducted into the Baking Hall of Fame by the American Society of Baking during the BakingTech 2017 event in Chicago from Feb. 26-28.

“Since I was 12 years old working in my aunt’s bakery, I always knew that I wanted to own my own cookie factory,” Cason said. “Being inducted into the Baking Hall of Fame is such an honor and makes me realize all of my dreams have come to fruition.”

Cason’s career in cookie baking began at Greg’s Cookies in Birmingham at a time when almost all sales were from 1-cent cookies purchased out of a jar.

After graduating from college and serving in the U.S. Army, and continuing to work with his aunt at Greg’s Cookies, Cason eventually purchased the company in 1970 with a vision for expanding sales into more populous areas of the country and implementing tray packaging and other advancements.

A national conglomerate approached Cason about purchasing Greg’s Cookies and Bishop Baking Company in Cleveland, Tennessee, which Cason had acquired.

Though Cason insisted he was not interested in selling, an offer was made that he could not refuse and he sold the companies in 1986.

Cason signed a five-year non-compete clause but always planned to return to the industry. During this time away, Cason took a nutrition class at the University of Alabama at Birmingham, where the instructor said two bites satisfies a person’s craving for something sweet—and anything past that is eating just for the sake of eating.

“That’s where I got the idea about bite-sized cookies,” Cason said.

Friends doubted bite-sized cookies would be popular, and Cason’s wife had reservations about him investing much of the funds from the sale of his previous operations into a new company, which launched in 1991.

“The first year I started off with Bud’s Best, I had no customers, no sales and I had invested $25 million in equipment and everything getting it started,” Cason said.

Bud’s Best now contract manufactures for a national baking company, has added on to its Riverchase facility three times to a total size of about 130,000 square feet, has an output of more than 1 million cookies per hour, employs about 175 people and produces several varieties and product lines, including Uncle Al’s standard-sized cookies.

Vanilla wafers is the company’s top variety, though Cason said his favorite is chocolate chip.

Cason said he is also asked why his cookies are the best.

“It’s because of the water that we use,” he said. “We’re in Shelby County, and we have some of the best water.”

More information about Bud’s Best Cookies, including how to schedule a tour, can be found at BudsBestCookies.com.

The Hall of Fame award was created to recognize industry innovation and entrepreneurial spirit. Those inducted are selected for their achievements in organizational growth and development, equipment design and innovation, advancements in ingredient technology and processing or related service to the commercial baking industry.

“The lives and careers of these individuals provide wonderful examples of excellence and leadership,” said John Del Campo, chairman of the ASB Baking Hall of Fame Evaluation Committee and general manager of Repco – Bakery Division in Salina, Kansas. “They represent the best qualities of compassion, forward thinking and personal judgment. The committee feels honored to have looked at their accomplishments. They inspire our future by their experience.”

Cason was one of the first cookie producers to recognize the potential of contract manufacturing.

In the 1970s, Cason saw that large consumer products goods companies were moving out of manufacturing activities to concentrate their resources on marketing. He reinvigorated a modest bakery concern in the Southeast to serve that need.

In doing so, Cason practically invented the category of mini-cookies by being the first to master the mass production of these bite-size treats, now found at convenience stores all around the country and on Amazon.com.

Since its launch in 2006, the Baking Hall of Fame will have enshrined 76 individuals with the 2017 class.

Cason said he gave his acceptance speech to a crowd of more than 1,000 people and noted that most inductees are from larger, national baking companies.

“It was kind of a unique thing for us,” Cason said. “I’m probably the first one from the cookie business that has gotten that award.”

By ALEC ETHEREDGE | Sports Editor NORTH SHELBY – Role models come from all different facets of life, whether they... read more