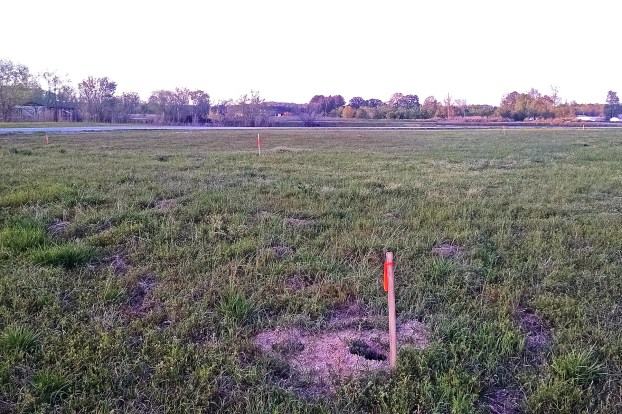 The area which the Limestone public works facility is set to be built on was recently marked. While some residents support the city’s decision to build the facility, others are adamantly opposed to it. (Contributed)

ALABASTER- Some Alabaster locals have voiced their opinions after the Alabaster City Council elected to proceed with plans to build a public works facility on the Limestone Park property.

The facility is planned to house the city’s garbage trucks as part of the residential garbage services that Alabaster will offer to residents in 2018.

According to several locals, construction for the new facility has the potential to disturb the park’s wildlife and attract fewer visitors.

“If you look around, you’ll see a small footprint park. There’s already not a lot of space to go around. It just doesn’t fit,” Sam Griswold said. “The city is going to build it right up against some of the wetlands in this park.”

“There are also concerns about the traffic that could be caused by these trucks on a one-lane road that people walk on,” Liz Masoner added.

Masoner said she sees the potential for the garbage trucks to contaminate the park’s wetlands.

“They want to wash off the trucks and do oil changes. There are a lot of contaminants that could come into the wetlands, and that can have lasting effects,” Masoner said. “This whole habitat is rare to the area. We’ve got one of the three remaining Tupelo swamps in the Birmingham area.”

After the city first voted to start planning for the facility during a council meeting on Monday, April 10, a petition entitled “Save Limestone Park, help preserve this rare ecosystem with birds, animals and plants,” was posted on Change.org. The petition is currently closed.

Jim Reining of the Alabaster Radio Control Association said he agrees with the city’s decision. Reining, who identifies as a frequent visitor, said he doesn’t usually see many people at the park.

“I just think somebody’s trying to start trouble. Out of the people griping about it, who actually comes here?” Reining said. “I don’t see how it will make a bit of difference. The city has been nothing but great to us.”

Alabaster Mayor Marty Handlon said she views the new facility as a positive thing. According to Handlon, the property currently houses a police firing range, a flying field for radio-controlled model airplanes and a community garden.

“If the bullets from the firing range or the RC Club field don’t bother anything, why would this? I don’t see how there is any potential for contamination,” Handlon said.

Handlon said building it on the city-owned Limestone property was the best financial decision for the city, and is conveniently located only five miles away from the Shelby County Landfill.

“We already had this property, so we thought it would be wise to use this instead of using taxpayer money to buy another piece of land that isn’t in the best location,” Handlon said.

At a council meeting on Monday, April 24, the city voted to contract with Barge, Waggoner, Sumner and Cannon, an outside engineering and architectural firm, to design the facility. Handlon said construction on the facility should start at the beginning of 2018.

According to Program Director Andy Coleman, Limestone Park is part of the Birmingham Audubon Society’s Urban Bird Habitat Initiative, which aims to promote bird habitats and educate residents about the wildlife in their areas.

Coleman said the Birmingham Audubon Society has always had a positive working relationship with the city of Alabaster, and they will be working with the city to ensure that construction of the facility is as safe for the environment as possible.

“We obviously want the community to treasure the park and use it as a way to access nature,” Coleman said. “The city of Alabaster has been a tremendous municipal partner. We support the city’s decision, and we look forward to working with them to make this an environmentally friendly project.”