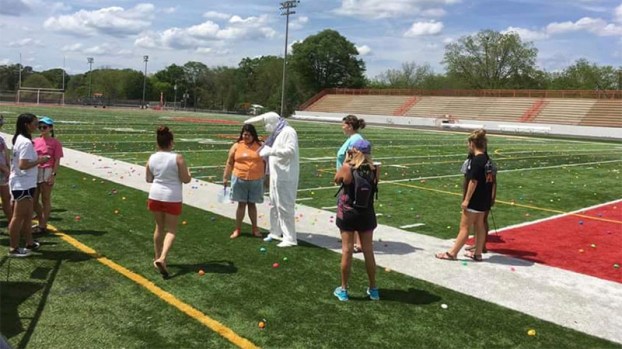 ALABASTER – Organizers plan to make a special-needs Easter event annual after a successful debut in mid-April.

“We had a truly wonderful time,” said Angel Warriors President and CEO Jamia Alexander-Williams. “There were about 100 people that came out, and the response was really positive. We plan to make it an annual event now.”

The Angel Warriors program “exists to help nurture individuals with special needs and multiple disabilities, so that they may realize their full potential and build their futures,” according to the organization.

The free event was held at Larry Simmons Stadium on April 15 at the stadium’s football field.

Williams said kids of all ages were able to have fun at the event in a no judgment, safe zone.

“They were able to be themselves, and interact with their peers and friends that they know from other special needs events,” Williams said. “I heard from several parents that told me they were so happy to see their kids having a good time. One parent told me it was the first Easter egg hunt they had attended for their child where the child was not trampled on, and there were enough eggs for her to hunt and have fun.”

Activities including a bubble machine, a jumping station were available at the event, and refreshments including hot dogs, drinks, popcorn, cotton candy, cupcakes from Sweet Sensations were also available.

Williams said the children were treated to visits from both Peter Cottontail and Warrior the dog.

“It was just really nice to see everyone having a good time,” Williams said. “It was open to all ages, and the kids were able to enjoy everything and not worry or stress.”

Williams said the Easter event was just one of several events planned this year including a sensory area at City Fest on June 3, and a water play day on July 15.

By EMILY REED / Special to the Reporter CALERA – The city of Calera, along with other cities throughout Shelby... read more