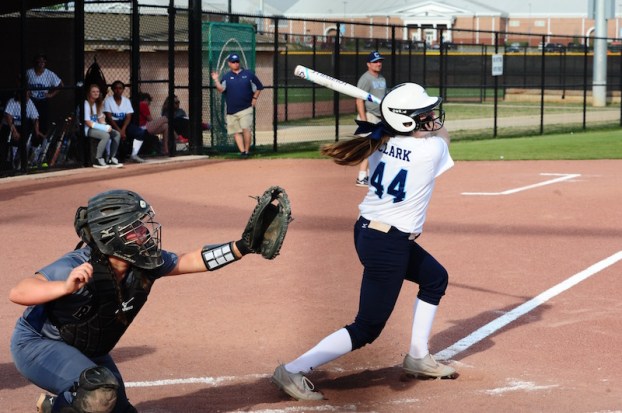 Charley Clark had a strong couple of games for Calera to end the season going 3-3 with four walks, four runs scored and one RBI. (Reporter photo/Alec Etheredge)

The Calera Eagles softball team is on a roll at the right time having won eight of their last 10 games to end the season as they head into the area tournament with an overall record of 19-11.

Despite grabbing the three seed behind Jemison and Marbury in the area tournament, their recent success will definitely help give them some momentum and confidence as they square off against their two area foes looking to continue their season.

It helps even more that those wins came over 7A Mountain Brook and 6A Homewood as beating higher classifications always seems to be an extra boost to a team.

After falling behind 1-0 in the bottom of the first, Calera responded with runs in the second and third innings to take a 2-1 lead, a lead the Eagles wouldn’t relinquish the rest of the way as they went on to win 6-3.

The Spartans responded in the bottom half of the inning with a single and a double. During the third at bat of the inning, a runner was able to score on a passed ball before a groundout allowed the game-tying run to cross the plate as well.

Tied at three going to the top of the seventh, Calera needed an offensive explosion, which is exactly what they got. The Eagles strung together a walk from Clark, a single from Landrum and a three-run home run to center field from Nicole Harrelson as they stormed in front to take a 6-3 lead. Calera held on in the bottom half of the inning with relative ease on their way to victory.

Clark led the Eagles at the plate going 2-2 with two walks, three runs scored and one RBI. Landrum also had a nice game going 2-4 with two RBIs and a run scored. Five different Calera players picked up a hit, including three multi-hit performances, while three grabbed at least one RBI.

Ashlynn Hamm picked up the win in the circle allowing six hits and two earned runs while striking out three.

In game two, Calera fell behind 1-0 after the top half of the first inning, but scored four runs during the middle innings to take a 4-1 lead. During this go around, they didn’t allow the Patriots to threaten a comeback as they held on to win by the final of 4-2.

The Eagles first two runs came without recording a hit as they scored on a line out and a passed ball to take a 2-1 lead after four innings. Not much changed with their next two runs in the bottom of the fifth either.

Clark and Landrum started the threat with back-to-back walks. During Landrum’s at bat, Clark was able to steal two bags and get all the way to third. Harrelson came to the plate next and in similar fashion, Clark was able to score on a passed ball, while Landrum advanced to second on a stolen base.

Landrum eventually moved over to third on another passed ball, which allowed her to score on a sac fly from Hamm to give Calera its 4-1 lead. The Spartans scored one run in the top of the sixth thanks to an error, but were unable to get any closer as the Eagles held on for the win.

Five Calera players picked up a hit during the game as they scored four runs with just one RBI in the game.

Hamm had another strong game in the circle throwing a complete game allowing just four hits and one earned run while striking out four batters.

By ALEC ETHEREDGE | Sports Editor What an incredible year it has been for the 2017 Thompson Warriors softball team.... read more