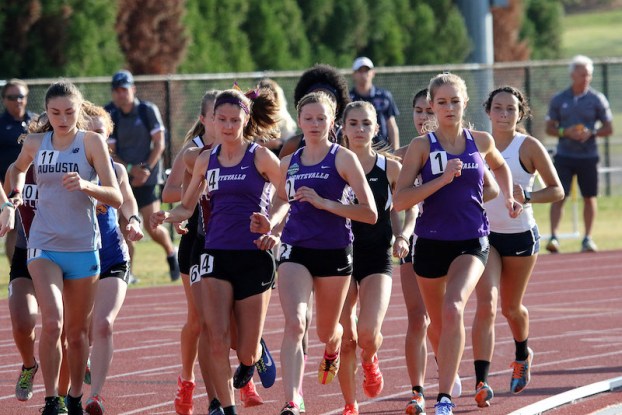 Chelsea alum and University of Montevallo senior Cheyenne Thompson was named as the Peach Belt women’s track and field Athlete of the Year after a strong senior season. (Contributed)

MONTEVALLO – The University of Montevallo set a new Peach Belt Conference record with five Falcons being named either Player of the Year, Runner of the Year or Athlete of the Year in women’s sports in the conference during the 2016-17 academic year.

Thompson won the women’s 1,500-meter run after setting a new program record with her time of 4:34.48, which also set a new Peach Belt Conference record.

The Chelsea, Alabama native also set a new PBC and school record with her time of 10:57.01 in the women’s 3,000-meter steeplechase.

Nelson became the first student-athlete to be named the Peach Belt Conference Runner of the Year three times since the award was designated for regular-season accomplishments in 2008.

The junior from Brewton, Alabama was also named the conference’s Runner of the Week three times this season.

The Huntsville, Alabama native either led the Peach Belt Conference or finished second in the conference in seven different statistical categories.

She also finished second in the conference with her .333 hitting percentage.

Bohan registered 27 kills in the Falcons’ 3-1 loss against Augusta University in a Peach Belt Conference match Sept. 17, which marked the most kills by a PBC player in a single match this season.

Bohan also registered 10 blocks in the Falcons’ 3-2 win over Belmont Abbey College in a non-conference match Sept. 9, which marked the most blocks by a PBC player in a single match this season.

Bohan was also named to the Peach Belt Conference All-Academic Team with a perfect 4.00 cumulative grade-point average as a Psychology major.

Eddy turned in a phenomenal performance in her final season with the Falcons. This past season, the Hartsell, Alabama native led the PBC with second top-10 finishes in nine events this year.

Eddy recorded her fourth career win at the season-opening Full Moon Invitational.  A two-time PBC Player of the Week, she shot a 67 at the Full Moon, the lowest single round in the PBC this year.  She also finished 10th at the Barry Women’s Invitational, shooting a 219 over the three rounds, the second lowest 54-hole total in the PBC.

Eddy finished the season second overall in stroke percentage at 74.20 and had four top-five results.

This is the first time that Eddy has earned this award and also helps keep the Player of the Year honor at Montevallo for the fifth time in the last seven years.

Eddy was also named to the All-Conference first team by PBC Coaches for the third time in her career.

The center fielder from Plano, Texas led the Falcons with a .403 batting average, which ranked her fifth in the Peach Belt Conference this season, while also driving in a team-high 35 runs.

Vining also led Montevallo with a .643 slugging percentage and a .467 on-base percentage while finishing with four home runs on the season, which tied her for second on the team. Vining led the Falcons with 18 extra-base hits during the regular season.

The preseason All-Peach Belt Conference selection showed off her speed on the base paths with five triples, which tied her for first in the conference, and 25 stolen bases, which ranked her fifth in the conference. Vining was also second on the team with 25 runs scored during the regular season.

Vining, who started all 45 of the Falcons’ games this season, was also named a preseason National Fastpitch Coaches Association (NFCA) NCAA Division II Player of the Year watch list selection and a preseason NCAA Division II All-American by the NFCA. Vining was also named the top junior in the Southeast Region by Down South Softball before the season.

By STEVEN CALHOUN/Staff Writer MONTEVALLO – The University of Montevallo hosted the Falcon Classic March 24-25 at the university’s track... read more