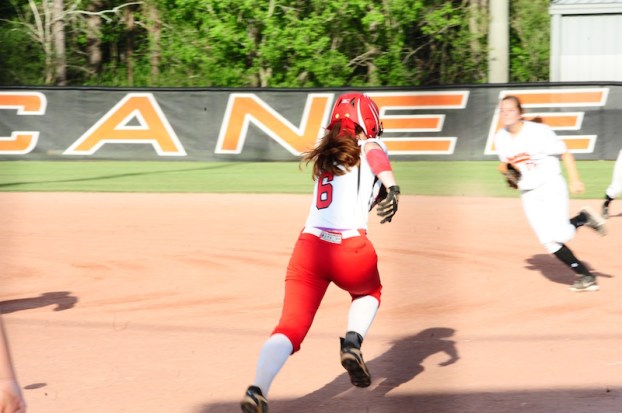 Lauren Haskins had a monster final week at the plate going a combined 7-8 with eight RBIs and four runs scored. (Reporter photo/Alec Etheredge)

What an incredible year it has been for the 2017 Thompson Warriors softball team. After taking down McAdory 18-3 on Tuesday, April 25, the Warriors came back and beat Mortimer Jordan in a nine-inning thriller 7-2 to end the regular season with 31 wins and cement themselves as one of the best high school softball teams in the state.

Something about extra innings brings out the best in this squad. On Tuesday, April 18, Thompson went into extras with Hoover and was able to score seven runs in the top of the eighth to win 10-3. In their matchup with Mortimer Jordan something similar happened as they scored five runs in the top half of the ninth in their 7-2 win.

Thompson has now ended the regular season by winning 15 of its last 18 games and looks to be one of the hottest teams in the state at the moment as they battled to an overall record of 31-10-3 to become one of a handful of teams across the state with 30-plus wins. That momentum will need to carry over into the area tournament as there are only two spots to share between Vestavia, Hoover and Tuscaloosa County, who are three of the best teams in the state.

McAdory was no match for Thompson in this game as the Warriors scored 10 runs in the second and eight more in the third to end the game in three innings with an 18-3 win.

The Warriors used 17 hits in the three innings to pull off the run-rule win and were led by Lauren Haskins and Macie Crumpton. Haskins went 3-4 with three RBIs and two runs scored, while Crumpton had a 3-3 day with four RBIs. Lauren Cabiness also had a four-RBI game going 2-2 at the plate with one walk.

Crumpton got the start in the circle and allowed eight hits and three earned runs in the win.

Thompson’s matchup with Class 5A No. 4 Mortimer Jordan was a little more thrilling than its early week game with McAdory.

Thompson struck first in the top of the third thanks to a single from Kindall DeRamus and two-run home run from Lauren Haskins to give the Warriors a 2-0 lead.

Mortimer Jordan answered back in the bottom of the fourth with its first run of the game thanks to an RBI-single as they had gotten within one. Thompson was able to hang on to that lead for a good while as they went into the home-half of the seventh still up 2-1.

The Blue Devils put together their next surge in the bottom of the sixth. After two groundouts to start the inning, they strung together a single and double to tie the game at 2-2, which forced extra innings.

Neither team threatened until the Warriors in the top of the ninth as they used five singles, three walks and a second home run by Haskins to explode for five runs and take a commanding 7-2 lead. Mortimer Jordan was able to put two base runners on in the bottom of the ninth, but were unable to bring a run home as Thompson held on to win 7-2.

Haskins had a monster game going 4-4 at the plate with two runs scored and a remarkable five RBIs to pace the Warriors. Seven players picked up a hit, while three had multi-hit games.

Thompson will now take on No 10 Tuscaloosa County in the first round of the area tournament on Wednesday, May 3, at 3:15 p.m.